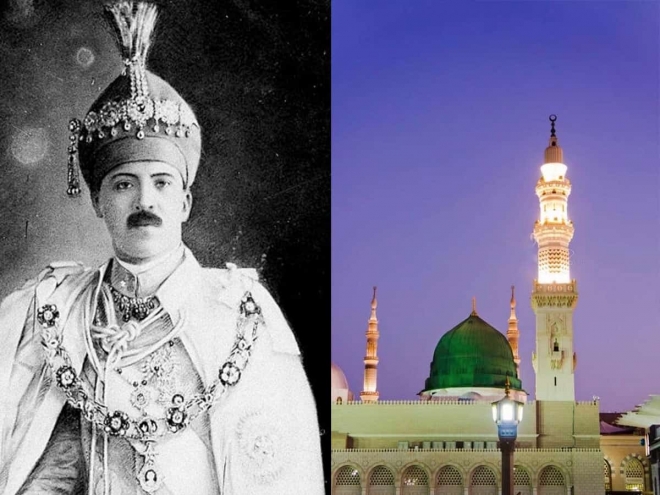 In 1936, on the occasion of his Silver Jubilee, the Nizam of Hyderabad, Mir Osman Ali Khan had proposed the installation of a new electric plant and lights at the Holy Prophet’s Mosque at Madina, Saudi Arabia at his expense. The older electric plant was apparently out of order as it had been fitted by the Ottoman Rulers many years ago.

The Nizam had also proposed to dispatch the Chief Engineer of the Hyderabad Public Works Department, Nawab Ahsan Yar Jung to Madina in order to oversee and execute the project.  The electric installation was to be a Wakf from the Religious Endowment Office at Hyderabad, and the Wakf Board would also bear the monthly maintenance cost.

In addition, the Nizam had also sought to repair the graves belonging to the Sahaba Kiraam (companions of the Holy Prophet) at Jannatul Baqi in Madina including those of the earliest Islamic caliphs, the Prophet’s wives and family. The project also included the repair and renovation of the grave of his uncle, Hamza. At Jannatul Moalla which is a graveyard at Makkah other companions of the Prophet are laid to rest, the Nizam got its compound wall and gates repaired.

The original letters written in this regard are with the India Office of the United Kingdom. Copies of some the letters are attached with this article. The letters which unravel the fascinating map of the route taken by the official correspondence between countries of that time. I have tried to trace that route on the map attached. The Nizam’s proposal was sent through his government’s Peshi Office through the Sadrul Mohaam or the Prime Minister to the British Resident at Hyderabad, who then sent it to the Foreign Department of the Viceroy of India in Delhi. From there they went to the Foreign Office of the United Kingdom in London, and then on to the British Consul in Cairo. From here it was sent to Jeddah, Saudi Arabia to “His Britannic Majesty’s Envoy Extraordinary and Minister Plenipotentiary in the Dominions of His Majesty the King of Saudi Arabia.” This British Envoy, or Ambassador, would present the proposal to His Royal Highness the Minister for Foreign Affairs of Saudi Arabia, whose office was in Makkah at that time. The approvals followed the same route backwards, and between the Nizam’s first proposal and Nawab Ahsan Yar Jung’s departure to Saudi Arabia in late 1938, two years had already elapsed. The electric lights were installed sometime in 1939 for the benefit of all.

The letters also highlight the complexities of bureaucracy in an older world dominated by Imperialism.

Dr Mohammed Najeeb Shahzore is a specialist physician based in Kuwait. He has a keen interest in the history and heritage of Hyderabad.