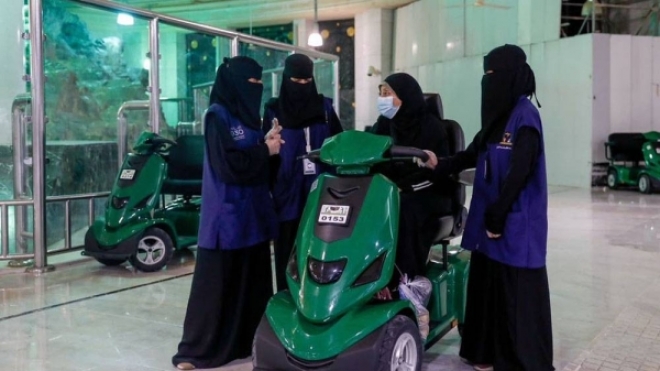 MAKKAH — The General Presidency for the Affairs of the Two Holy Mosques has tasked around 50 young Saudi women staff to serve women Umrah pilgrims and visitors to the Grand Mosque.

Each one of these women employees, bearing the title of “Mutawwifah” (one who facilitates tawaf or circumambulation around the Holy Kaaba) accompanies the elderly women pilgrims and guides them to various sites inside the Grand Mosque.

They enlighten the women pilgrims on the need to comply with the coronavirus precautionary measures and preventive protocols.

They also drive electric carts arranged by the presidency for the aged and disabled pilgrims. There are 5,000 wheelchairs and 600 electric carts at the Grand Mosque to serve the pilgrims and visitors, Al-Arabiya.net reported.

These women staffers expressed their ecstasy in having the opportunity to engage in a duty, which is indeed a virtuous deed and is closely akin to a humanitarian mission.

Rehab Al-Harthy, one of the women staffer, said that she has been serving women pilgrims since seven years. “In the beginning, I was an employee and later promoted to an official.

“There are no words to express my joy to have the opportunity to serve the pilgrims not only as a job for this world but also a good deed for the hereafter,” she said.

“We, 50 in number, came to the Grand Mosque to offer voluntary services seven years ago and offered work with full dedication. Hence, the presidency officials tasked us to be in charge of wheelchairs for women pilgrims and eventually we started receiving monthly salaries,” she said.

For Meeaad Al-Tuwairqi, serving pilgrims at Islam’s holiest shrine is the realization of her dreams and an answer to her supplications.

“Since childhood, my passion was to lend a helping hand to others and my supplication was to get an opportunity to serve the guests of God. Now, I work daily eight hours from 3 p.m. to 11 p.m.,” she said.

She added that she values the fact that her supplication was answered as more than any treasures in this world.

On her part Arwa Ahmad said she has the feeling of serving her mother while offering services to the elderly women pilgrims.

Zulfah Ahmad, an Egyptian expatriate woman residing in Al-Qassim, said that it was a great help for her to complete performing Umrah with the help of electric carts, operated by women staff and at reasonable charges.

“In the beginning, I was afraid to come to Makkah to perform Umrah due to the pandemic fears. However, I was so much impressed by the meticulous arrangements and precautionary measures being made inside the Grand Mosque to stem the spread of the pandemic and praising God for getting me the opportunity to perform the rituals in much ease and comfort,” she added.