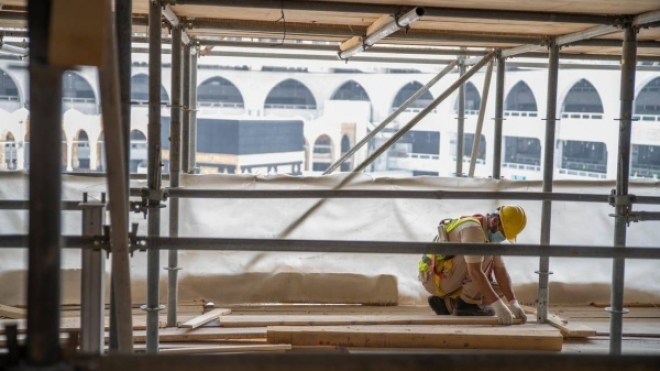 More than 45 percent of the construction works of the two minarets of the King Abdulaziz Gate, the main gate of the Grand Mosque, has been completed while the two minarets of the Umrah Gate and one minaret of the Al-Fatah Gate have been completed during the period of suspension of the Umrah and prayers at the Grand Mosque following the outbreak of coronavirus, according to a report in Al-Arabiya.net.

Eng. Ammar Al-Ahmadi, the director-general of the General Department of Projects at the presidency, said that the agency for projects and engineering studies at the presidency, represented by the General Department for Projects, has beefed up the field inspection system of the construction work, taking advantage of the low number of Umrah pilgrims and worshipers during the pandemic period.

Al-Ahmadi said the department took advantage of the low number of worshipers during the Umrah suspension period in supervising a number of projects simultaneously. The most prominent among them are roofing of the mataf building with completion of roofing on the mataf floor by 43 percent, ground floor by 20 percent, and first floor by four percent.

The construction works at Ismail Gate crossed 36.4 percent on the southern façade where installation of precast concrete reached 100 percent while marble works of facades reached 25 percent whereas the construction works in the northern facade were completed by 36.74 percent with the installation of precast concrete and marble works of facades reached 100 percent and 40 percent respectively.