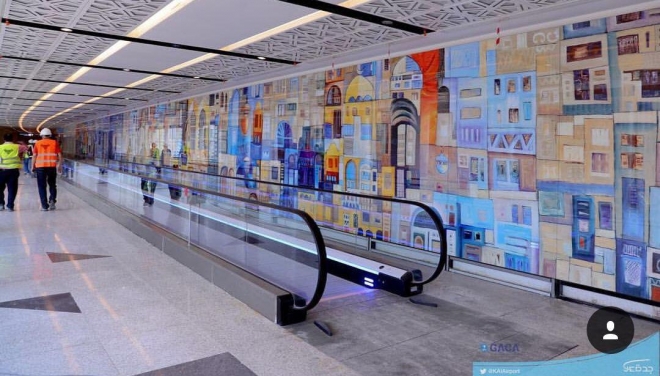 MAKKAH: Visitors to the Kingdom’s Jewel of the Red Sea can catch a glimpse of its past glory in a mural depicting the city’s prized sites in one of Jeddah’s new airport halls.
A 36-meter mural depicting the city’s old crowded neighborhoods, with the distinctive intricate latticed windows adorning the shops and buildings, has added a beautiful splash of color to the terminal building.

Saudi artist Amal Felemban said that the work of visual artists in the Kingdom is currently witnessing a major transformation.

Her mural, which took a month and a half to complete, was initially 12 meters long but was tripled in size to be placed at the airport.

Her path in documenting the old Hijazi cities began 10 years ago when she participated in a competition to beautify the city of Makkah under the patronage of Makkah’s Gov. Prince Khalid Al-Faisal and the holy capital’s municipality.

The aim of the Makkah Beautification Competition — where Muslim artists from around the world were invited to participate — was to spread artistic culture through works that narrate the heritage of the capital of Islamic culture.

The artists had to design murals for 12 sites, inspired by two main elements: The heritage of the Makkah environment (the nature of the place, architectural elements and traditional artifacts), and the Islamic heritage.

“I participated in the competition and chose one of the smallest sites, 70 meters long, and conceived several designs about Hijazi cities,” she told Arab News.

“My goal was to show our urban civilization and urban cultural heritage and the aesthetics of the woodwork in dormers and the social interconnectedness between people. I chose colors that express the clarity and depth of those human relations between neighbors.”

The location she chose was a few meters away from the Holy Mosque. The Saudi muralist supervised its execution after competing against leading visual artists from around the world.

“I used to go from Jeddah, where I live, to Makkah to supervise the implementation of the mural before noon and stand alongside the workers. The struggle was with people’s looks, for I am a woman standing with the workers in the afternoon. They used to look at me in surprise and some in disapproval at that time,” said the artist.

She said that she had to wear a disguise to be able to complete her work in the face of people’s scrutiny of a woman participating in painting murals.

Nothing deterred Felemban from her goal. Her mural was inaugurated by Minister of Municipal and Rural Affairs, Prince Mansour bin Mutaib.

“This competition was an opportunity to be recognized, as I did not expect to win against so many great Saudi artists until we were invited to a ceremony to announce the names of the winners,” she said. She was the only woman among the winners that year, which prompted her to aim high and continue her line of work, one mural at a time.