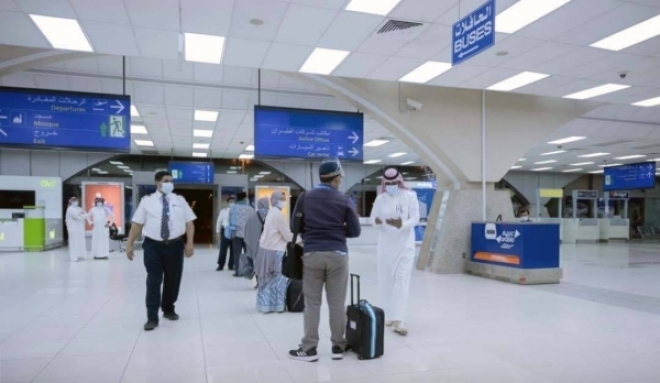 The pilgrims left the airport for Makkah where they will be spending three days in mandatory quarantine at their accommodation before performing the Umrah pilgrimage.

This is in line with the coronavirus precautionary measures and preventive protocols set by the competent authorities while allowing foreign pilgrims to perform pilgrimage with the beginning of the third phase of the gradual resumption of Umrah service and visit to the Two Holy Mosques from Nov. 1.

The Ministry of Hajj and Umrah was keen to implement the safe Umrah model for those arriving to perform Umrah rituals, and it raised the readiness of all Umrah service providing companies and establishments to facilitate the trips of the pilgrims during their stay in the Kingdom.

This is in implementation of the directives of the Saudi government headed by Custodian of the Two Holy Mosques King Salman, and the follow-up of Minister of Hajj and Umrah Muhammad Benten.

The ministry called on pilgrims to strictly adhere to the precautionary measures and preventive protocols from their arrival until their departure.