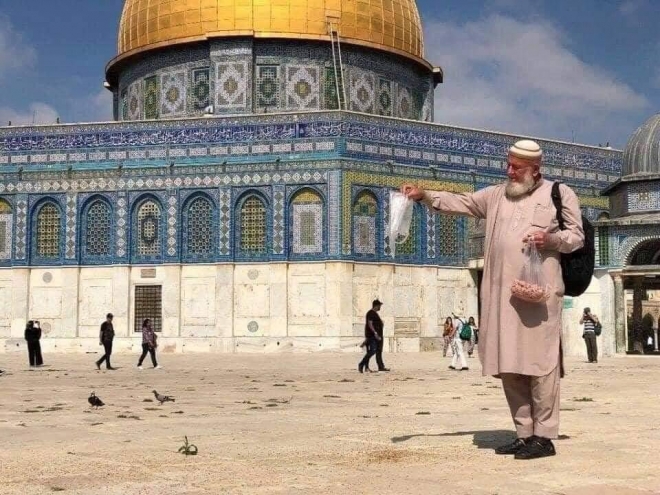 Ghassan Younis, 72, popularly known as the "father of the kittens" at Jerusalem's al-Aqsa Mosque compound, passed away on Tuesday due to complications caused by the novel coronavirus, according to Palestinian media.

For decades, Younis would drive more than 90 minutes from his home in Arara, an Arab-Israeli town in northern Israel, five times a week to feed the cats and birds at the compound and hand out sweets to children at the mosque.

Groups of cats and birds would flock around him when he entered the compound with bags of food, Palestinian media said. Images posted on social media show Younis surrounded by birds and cats at al-Aqsa.

Younis, also known by the nickname Abu Hurayrah, in reference to one of the companions of the Islamic prophet Mohammed who was known for his attachment to cats, visited the compound for the last time shortly before he was infected with the virus in November, according to Palestinian media.

"At first, I used to bring sweets and food for old people,” Younis said in a 2019 video interview with Reuters. “With the help of God, anyone who would meet me, young or old, or anyone coming to visit al-Aqsa, I would give them some of the sweets. As you just saw, I moved to feed the cats and birds."

Many Palestinian social media users mourned Younis's passing, with many marking the significant effort he made to visit the site despite the long distance from his home.

"Hajj Younes was one of the most selfless men in the community," Qasem Abdelhaq, a leader in Jerusalem’s Silwan neighborhood, told The New Arab. “He was commonly nicknamed ‘Abu Al-Qatt’ (father of cats) because he used to come to al-Aqsa Mosque from his hometown inside the 1948 territories at dawn to feed the cats and birds.”

“He was known for distributing sweets and balloons to the children, and then distributing clothes and candies to the visitors of the blessed al-Aqsa Mosque," Abdelhaq said. "He was a very good person; may God have mercy on him and forgive him and grant him the greatest reward in the afterlife.”