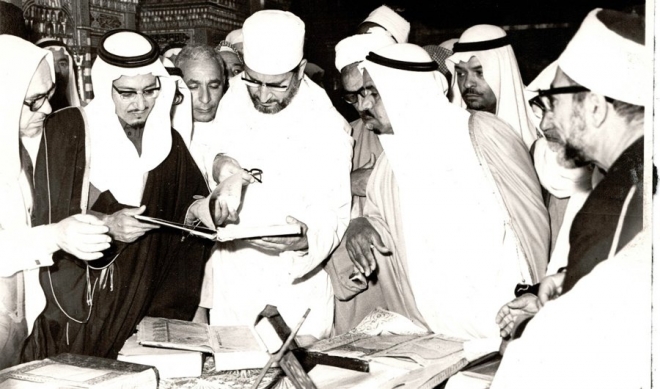 MAKKAH: An exhibit showcasing rare manuscripts of the Prophet’s Mosque has revealed the rich history of the city and the work of scholars that once called the holy city their home.

The King Abdul Aziz Foundation for Research and Archives (Darah) has revealed a large number of rare artifacts, some dating back 800 years.

Stone inscriptions in “Madani” script found in valleys and mountains near the city are among some of the pieces to be showcased on the sidelines of the permanent exhibition of rare manuscripts in the Prophet’s Mosque.

Darah’s official spokesman, Sultan bin Hamad Alawairdhi, told Arab News that “this is a new step in the path of serving the treasures preserved by different generations of scholars.

“This is considered one of the most important aspects of cultural heritage, which we bear the responsibility of preserving, especially since we possess more capabilities and expertise than our predecessors.”

Alawairdhi added that the exhibition will highlight the history of the Holy Qur’an and the Sunnah’s codification in Madinah to underline the importance of the scientific endowment to the Prophet’s Mosque and its library.

It will also show the origins of the library, while shedding light on the Kingdom’s historical efforts to enhance it.

Funded by Alinma bank and supervised by Darah and the General Presidency for the Affairs of the Two Holy Mosques, the exhibit will be open to visitors permanently.

Visitors will discover special and original copies of the Holy Qur’an, an exhibition on the Madani font, original manuscripts from the books of Sunnah, the prophetic biography, and the history of Madinah.

The exhibit is also expected to be available online in several languages.

This is considered one of the most important aspects of cultural heritage, which we bear the responsibility of preserving, especially since we possess more capabilities and expertise than our predecessors.

Alawairdhi said that the oldest manuscripts in the exhibition are “Ikmal Almuelim Bifawayid Sahih Muslim,” a scholarly book which explains the Prophet Muhammad’s sayings which dates back to 578 AH (1182 AD), and the “Mughni ala Mukhtasar Al-Kharqi” manuscript, a repository of one of the traditional Sunni schools of thought on jurisprudence.

The exhibition’s organizers want “to bring back into focus the Islamic cognitive gains as well as the Arab and Islamic intellectual production to be envisioned by different generations, especially the younger generations, in addition to documenting this ancient heritage.”

and foreign visitors to Madinah, and to highlight the role of manuscripts throughout Arab history in storing, preserving and providing information to researchers.

The exhibition also adds to Darah’s efforts in the field of codifying the history of the Two Holy Mosques. It also underlines the foundation’s most important scientific projects in the city, such as reviving the Madani font and promoting the history of Madinah and Islam through its written works.