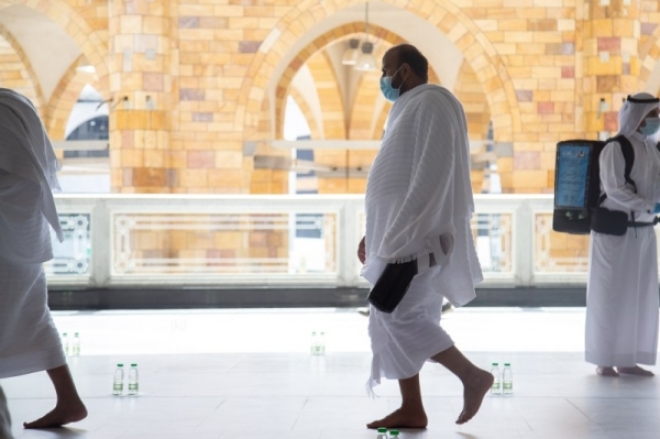 RIYADH — Minister of Hajj and Umrah Muhammad Saleh Benten said on Sunday that Saudi Arabia has received about 100,000 pilgrims from abroad after the resumption of Umrah service for foreign pilgrims since last Nov. 1.

Addressing a symposium on the Kingdom’s efforts in serving pilgrims and visitors, he said that the ministry is working on operational plans to welcome the month of Ramadan and studying the developments related to the next Hajj season with the concerned authorities.

“The Kingdom has worked to implement an integrated strategic plan for Hajj and Umrah with preventive plans and precautionary measures to allow the performance of Umrah in limited numbers in several precise phases.

“The technological programs have contributed to facilitate the performance of rituals in a professional and orderly manner, as well as to follow up the reports and indices related to performing Hajj and Umrah, and harnessing them to unify and develop accurate plans for the coming Ramadan.

“The programs will also help, in addition, to carrying out studies about the health related developments that the ministry is working on with the participation of the General Presidency for the Affairs of the Two Holy Mosques and all government agencies involved in serving the guests of God,” he said.

Benten cited the Kingdom’s humanitarian stances that drew the focus of attention and global admiration, including what it did towards the pilgrims who got stuck in the Kingdom after enforcement of strict precautionary measures and preventive protocols following the outbreak of the pandemic.

These pilgrims were provided with all means of comfort until their return to their countries, the minister pointed out.

“The Ministry of Hajj and Umrah had worked around the clock, in cooperation with the security and health authorities and the presidency, on plans to resume the Umrah service in three phases, as the preparations required careful precautionary measures and meticulous crowd management measures,” he added.