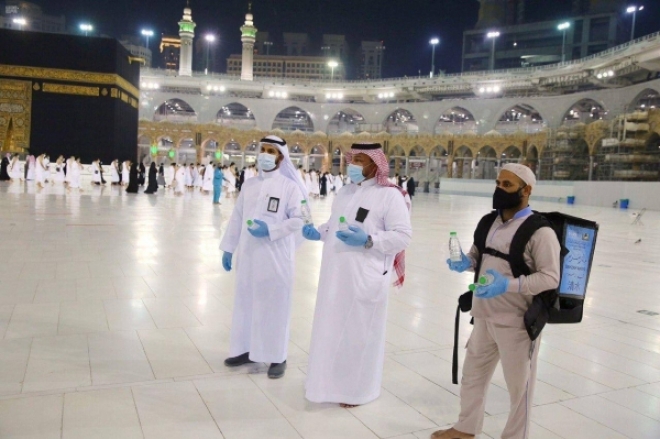 MAKKAH — Sheikh Abdul Rahman Al-Sudais, head of the Presidency for the Affairs of the Two Holy Mosques, announced on Sunday that the suspension of spreading iftar (breaking fast) sofras and performing i’tikaaf (the Islamic practice of staying at a mosque for worship for a certain period of time) at the Grand Mosque in Makkah and the Prophet’s Mosque in Madinah would continue during the upcoming holy month of Ramadan.

He said that the presidency is preparing to provide individual ready-made iftar meals for those visiting the Grand Mosque and that is in cooperation with the concerned committee at the Makkah emirate while distribution of suhoor (predawn meal) among visitors, worshipers and others in the areas of the Prophet’s Mosque and its courtyards and premises will be forbidden.

Sheikh Al-Sudais said this during the annual media meeting held remotely to launch the presidency’s operational plan for this year’s Ramadan season. The major highlight of the Ramadan plan is tackling the pandemic by adhering to precautionary measures, “the first of which is taking the vaccine, keeping physical distance and wearing a mask in order to preserve the health and safety of pilgrims, and worshipers” he said.

Sheikh Al-Sudais announced the presidency’s full readiness to receive pilgrims and worshipers. “The mataf (area for circumambulation around the Holy Kaaba) will be designated only for Umrah pilgrims and there will be five designated areas inside the Grand Mosque and its eastern courtyard for performance of prayers,” he said.

“Translators working at the Grand Mosque will provide guidance service and translate questions to scholars who will issue fatwas (religious edicts) in 23 languages,” he said. “There will also be sign language interpreters for the Friday sermon,” the presidency chief pointed out.

Sheikh Al-Sudais said that there will be special prayer areas and toilets for people with special needs in front of the Ajyad Bridge and King Fahd Gate in the eastern courtyard of the Grand Mosque.