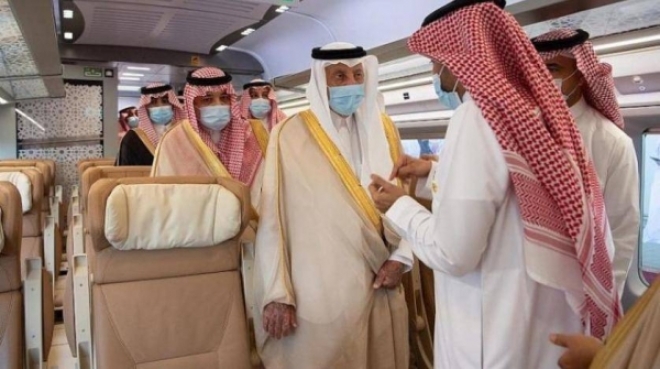 JEDDAH — The Haramain high-speed railway (HHR) resumed its operation on Wednesday more than a year after it suspended services due to the outbreak of the coronavirus pandemic in the Kingdom.

The operation of the HHR, which links four major cities in western Saudi Arabia, was suspended on March 21, 2020, as part of the government’s efforts to curb the spread of the deadly virus.

Makkah Governor Prince Khalid Al-Faisal, who is also an adviser to Custodian of the Two Holy Mosques King Salman, flagged off the train at the King Abdulaziz International Airport station in Jeddah, while Madinah Governor Prince Faisal Bin Salman witnessed the resumption of the operation in Madinah.

Prince Faisal Bin Salman stressed the importance of the commitment of government agencies in the region to follow up the implementation of precautionary and preventive measures to limit the spread of COVID-19, stressing the need for everyone to feel the importance of the current stage in confronting the pandemic in order to ensure the safety of citizens, residents, as well as pilgrims and visitors of the holy place.

Meanwhile, the chairman of the Public Transport Authority (PTA) Rumaih Bin Mohammed Al-Rumaih said that the Haramain Train, with its new launch before the month of Ramadan, “will work at full capacity to provide services in one of the busiest seasons.”

Dr. Al-Rumaih praised the full readiness of the train for the Hajj season for the current year, indicating that “the operational efficiency of the trips takes into account the most accurate health protocols to limit the spread of coronavirus and the highest standards of quality and safety.


⇐ Previous:
Fate of this year’s hajj remains unknown
Next: ⇒
No buffet services in Makkah restaurants, as virus cases continue to rise in Saudi Arabia