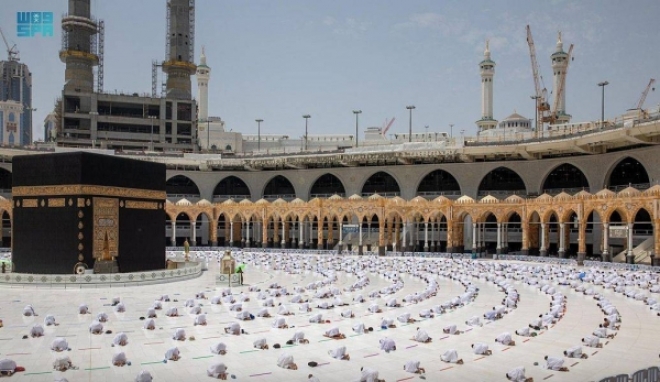 MAKKAH/MADINAH — Worshipers performed the first Friday prayer in Ramadan at the Grand Mosque in Makkah and the Prophet Mosque in Madinah amid an atmosphere of spirituality and serenity while adhering to intense coronavirus precautionary measures.

They thanked Allah the Almighty for the blessings of security, safety, comfort, and stability, and beseeching Him to end the pandemic.

Meanwhile, the General Presidency for the Affairs of the Two Holy Mosques has intensified their cleaning, disinfection, and sterilization efforts using environment-friendly disinfectants and detergents subject to the highest standards that do not affect public health.

Furthermore, the presidency mounted posters at the entrances of the Grand Mosque to guide the worshipers, earmarking that several paths for people with special needs.

In the Prophet Mosque, the presidency is providing all services to the worshipers and visitors while adhering to preventive measures in the mosque and its various facilities in coordination with the relevant authorities. It has set up checkpoints to ensure if the worshipers are eligible and hold valid permits through the “Tawakkalna” application.