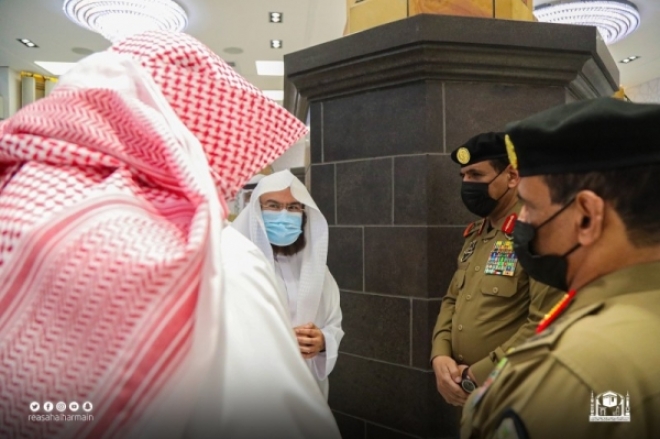 MAKKAH — Sheikh Abdulrahman Al-Sudais, president of the Presidency for the Affairs of the Grand Mosque and Prophet's Mosque, discussed on Friday with Director of Public Security Lt. Gen. Khaled Bin Qarar Al-Harbi the security plans for the Grand Mosque.

The two also discussed ways to enhance cooperation between the two sides as well as the human resources and all preparations and services provided by the presidency while adhering to all health protocols and preventive measures that guarantee the safety of the visitors and Umrah performers.

For his part, Al-Sudais hailed the security efforts made to serve Umrah performers and worshipers during Ramadan, commending the readiness of the security authorities to participate in serving the visitors of the Grand Mosque as well as the existing cooperation among the presidency, public security and all other security agencies in facilitating the activities of the Ramadan season.

The Secretariat General for Islamic Awareness of Hajj and Umrah at the Ministry of Islamic Affairs, Call and Guidance has intensified its awareness and guidance efforts in different international languages at the start of this year’s holy month of Ramadan, as Umrah performers and visitors continue to flock to the Grand Mosque to perform the rituals of Umrah and prayers in the Prophet's Mosque.

These rituals the pilgrims and visitors practice while taking all health precautionary measures and adhering to the health protocols taken by the Ministry in coordination with the competent authorities.

In a statement, Sheikh Mohsen Al-Harthi, secretary general of the Islamic Awareness of Hajj and Umrah, said the Secretariat General is acting as per a strategic plan, which has been put into action to organize the awareness and guidance efforts during the Umrah season for the year 1442 AH.

He added that the secretariat’s preachers have embarked on carrying out their preaching and awareness services to Umrah performers and visitors through multiple cabins located near the Grand Mosque.

Furthermore, a toll-free phone number (8002451000) service is available round the clock and in eight international languages to raise awareness on the Umrah rituals.


⇐ Previous:
40,000 to 50,000 Pakistanis may be allowed to perform Hajj this year
Next: ⇒
Dozens of world’s finest carpets cover floor of Prophet’s Chamber in Madinah