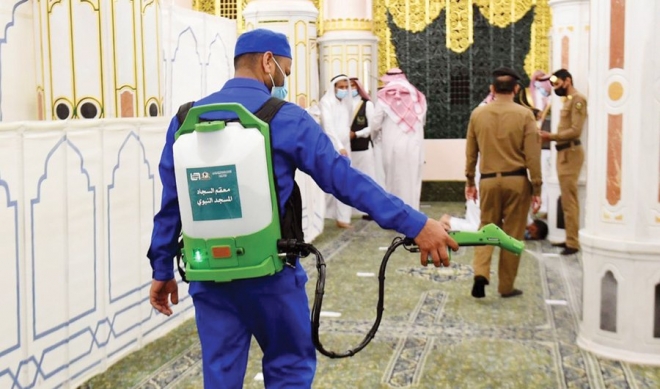 Dozens of the world’s finest carpets cover the floor of Rawdah Al-Sharifah (the Prophet’s Chamber) at the Prophet’s Mosque in Madinah, as part of the Saudi government’s care for the Two Holy Mosques.

There are 50 carpets in the chamber and all are crafted from top-quality materials and woven to the highest standards.

Bandar Al-Husseini is head of the carpet department at the Services Affairs Administration of the General Presidency of the Grand Mosque and the Prophet’s Mosque. He said that the carpets had scheduled sweeping and cleaning programs that were carried out on a daily basis.

“In case a carpet is damaged it is immediately removed and replaced with another carpet,” he said. “The carpets are also subject to disinfection and sanitization processes around the clock.”

He told the Al-Ekhbariya channel that visitors were allowed to enter the chamber in groups, adding that all carpets were disinfected and sanitized after every group.

The channel reported that every carpet was fitted with an electronic chip containing data.

More than 23,000 liters of eco-friendly disinfectants have been used for sanitizing carpets at the Prophet’s Mosque and the Bab Al-Salam corridor over the past few months.

According to the Saudi Press Agency, this step is part of precautionary measures taken to ensure the safety of worshippers and visitors during the coronavirus pandemic.
It also said that fragrances were used more than 7,743 times to perfume the mosque during the same period.

Mosque committees have been changing 450 carpets, and replacing the ones used in the Prophet’s Chamber every 10 days.

The mosque has also been applying preventive measures by distancing people, using marks on the carpets to avoid congestion.