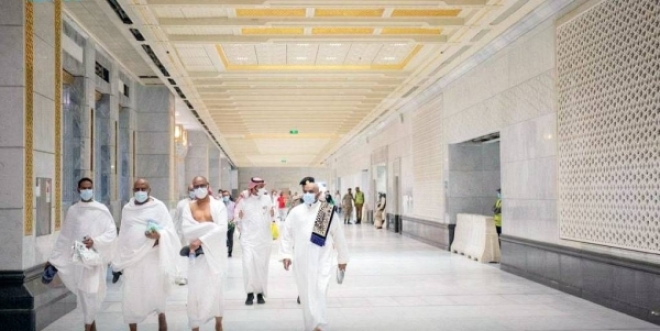 MAKKAH — The General Presidency for the Affairs of the Grand Mosque and the Prophet’s Mosque inaugurated the third expansion of the Grand Mosque during this year’s holy month of Ramadan to perform prayers while maintaining the higher safety standards and precautionary measures to guarantee the safety of visitors of the mosque.

The Presidency has prepared 60 praying areas (musallah) inside the new expansion, 38 for men and 22 for women, where all the entrances of the expansion are equipped with cameras to measure temperatures, in addition to allocating 91 employees from the Presidency to work in four shifts and more than 320 workers and supervisors for service works.

Regarding the work mechanism and the preparations made by the Presidency, Director of the General Administration for the Third Saudi Expansion Eng. Fares Bin Mohammed Al-Motrafi said that Zamzam Water amounts that are distributed to worshippers daily reach 12,950 liters through 127 cylinder bags, 19 zipper containers, and 33,000 one-use bottles that are distributed to worshippers through 50 bags.

Al-Motrafi said that service works in the third Saudi expansion are implemented through 288 workers, 22 monitors, eight supervisors and 91 employees who work round the clock within four shifts.

He noted that all routes and entrance gates after timings of prayers change into exist routes and gates for the safety and comfort of worshippers, in addition to sterilizing all walker devices and gates and distributing awareness stickers.

As for Iftar meals inside the expansion, Al-Motrafi said that the Presidency distributes packed meals that guarantee the safety of all and are distributed by adopting all precautionary measures.

He added that more than 14 voluntary groups are taking part in the third Saudi expansion, including 150 volunteers who take part in distributing meals and raising the awareness of worshippers, 100 health volunteers and 150 volunteers from the Saudi Red Crescent Authority,.

He commended the structural and engineering designs of the third Saudi expansion that adopted a unique and distinguished design that facilitated the processes of applying precautionary measures and distributing praying areas in light of the availability of all potentials to realize the aspirations of the leadership and offer the best services to visitors of the Grand Mosque. — SPA


⇐ Previous:
Ministry Calls on Public Not to Fall for Hoaxes about Hajj
Next: ⇒
Our solutions are smart and aim to enrich pilgrims’ experience