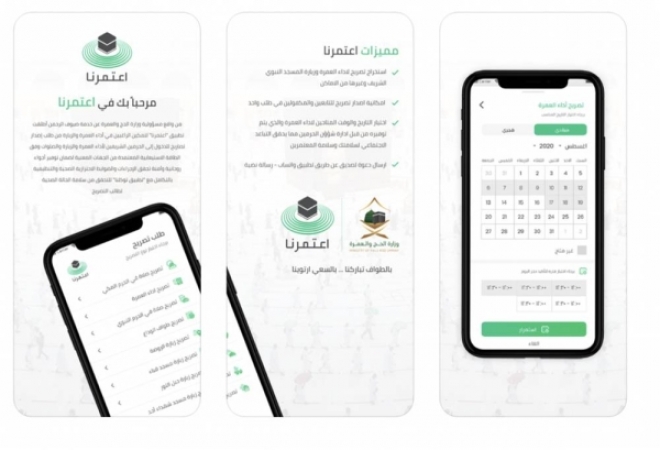 RIYADH — The number of beneficiaries from the “Eatamarna” application has exceeded 20 million, including those holding various kinds of permits.

The types of permits include those for prayer in the Grand Mosque, performing Umrah, visiting the Prophet’s Mosque, and praying in the Rawdah Al-Shareefah (which is an area deemed part of Paradise).

The number of beneficiaries from the Inaya Centers in Makkah and Madinah have reached 30,000. These care centers are concerned with serving Umrah performers from abroad.

In addition, the ministry has provided a safe transport service, by preparing four sites for transporting Umrah performers and worshipers to and from the Grand Mosque, via 120,000 operational trips, on board 2,500 buses.

Furthermore, the ministry has developed the secure Umrah model, based on modern technology and digitization of procedures, so as to guarantee a distinctive service to the pilgrims and high standard preventive measures.

The Assistant Undersecretary of the Ministry of Hajj and Umrah for Services to the Pilgrim and Umrah performer Hisham Bin Abdulmunim Saeed said that “The secure Umrah model” aims to achieve protection of man’s health and safety.

It also aims to improve the standard of services provided to the pilgrims and harness the latest technologies to provide all the means for the pilgrim’s comfort as well as meet his requirements and aspirations.

As to the “secure Umrah model”, Saeed said that the “Eatamarna” app determines and verifies the health status of the permit seekers or applicants through electronic integration with the “Tawakkalna” app, which has been developed by the Saudi Data and Artificial Intelligence Authority (SDAIA).

He said that there is continuous cooperation and coordination among the ministries of Hajj and Umrah, interior, and health, the Presidency for the Affairs of the Two Holy Mosques, and all the pertinent authorities, to facilitate for visitors performing their rites.