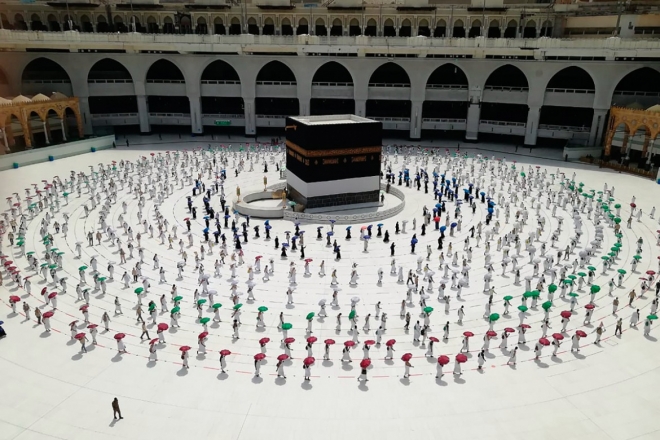 Determined to overcome the likely consequence of the cancellation of the annual pilgrimage to Saudi Arabia for two consecutive years, the National Hajj Commission of Nigeria (NAHCON) has revealed plans to adopt the Malaysia and Indonesia system of Hajj operations to deal with the congestion.

The chairman of the Hajj Commission, Alh Zilkrullah Kunle Hassan, disclosed this while speaking to Hajj correspondents in Abuja.

He said he was hoping that foreign nationals would be allowed to perform this year’s pilgrimage after Muslims all over the world were given limited opportunity to perform lesser Hajj (Umrah) earlier in the year, but since it is not, the Commission is determined to overcome the challenges ahead.

“Muslims all over the world were given limited opportunities to perform lesser Hajj (Umrah) this year and were hopeful up to the last minute that Hajj would take place this year. But as people of faith, we recognise the fact that what Allah has meant for you nobody will change it. So, since it has happened we are committed to face the future with hope, trusting God that it will be the last time such will happen that our people would not be able to perform Hajj.

“So, management would become necessary and I don’t think this is something new. To be honest with you, I was discussing with my counterpart from Indonesia four days ago when we had a zoom meeting and in their own case, he said those that were to perform Hajj this year are people who have been on the queue for 20 years. In Malaysia, people queue for more than 20 years. Whether we like it or not, we would probably have to face the same consequences.

“If you are familiar with going to Saudi Arabia for Hajj you would find out that pilgrims from these countries are usually old people because they were on the queue for many years. In fact, in Malaysia and Indonesia, some people are registered to perform Hajj from day of birth in order to make Hajj something they can do before their old age. A child given birth in Malaysia would be registered in the Hajj Saving Scheme of the country so that he or she can perform Hajj before he or she becomes too old. If that becomes our case, we will not be doing new things because we already have people who are doing so and our own would be just to tape from their idea and manage it better,” Hassan said.

While consoling intending Nigerian pilgrims across the country who had wish to be part of this year’s pilgrimage to Saudi Arabia to accept the cancellation in good faith, Hassan said the Commission will engage the State Muslim Pilgrims Welfare Boards and private tour operators to speak and enlighten the pilgrims, assuring them that their fund would be well secure.

“I want to use this opportunity to actually console many of our prospective pilgrims all over the country who had wished to be part of this journey this year. We are not alone in this, it is Muslims all over the world that are equally affected.

“We are going to engage the leadership of the State Pilgrims Welfare Boards and tour operators to go back and speak with the pilgrims. We’ll ensure that their funds are secure. Once that is done we all wait for next year and pray that it will take place,” the NAHCON chairman added.