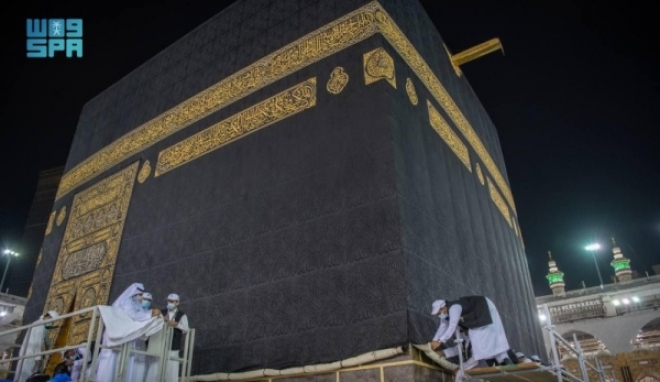 MAKKAH — The General Presidency for the Affairs of the Two Holy Mosques completed on Wednesday night the annual customary raising of the lower part of the Holy Kaaba’s cover (Kiswa) by about three meters in preparation for the upcoming Hajj season.

The raised part of Kiswa was replaced with a white cotton cloth having a width of approximately two meters across all four sides.

The procedure is carried out every year as a precautionary measure to prevent the pilgrims from damaging the Kiswa as they tend to touch it during their tawaf (circumambulation around the Holy Kaaba).

The presidency said that a total of 37 Saudi specialist tailors from the King Abdulaziz Complex for the Kaaba Cover took part in the process of raising the Kiswa, which is a piece of black silk with verses from the Holy Qur’an inscribed on it upward, to protect it from tampering.

It is noteworthy that the cover of the Kaaba was raised in the past, and the white color was used as an indication of announcing the heralding of the annual Hajj season, since it was the only means at the time to indicate the commencement of the Hajj season, in addition to protecting the Kiswa.