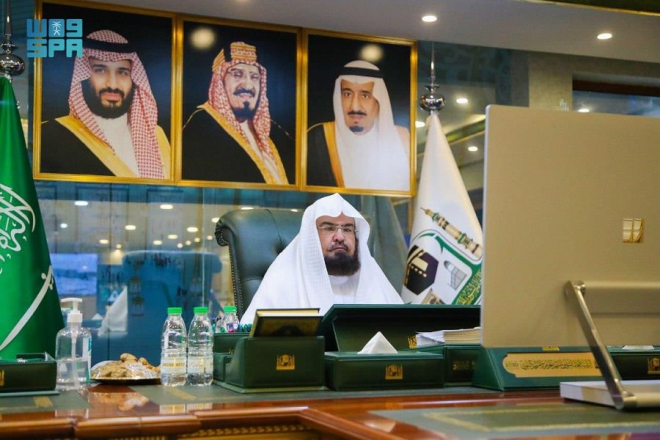 Saudi Arabia’s General Presidency for the Affairs of the Two Holy Mosques on Wednesday launched its operational plan for this year’s Hajj season.

Acting Minister of Media Majid Al-Qasabi said the country’s leaders and people are honored to serve the Two Holy Mosques and all who come to them as pilgrims or visitors.

Al-Qasabi said this year’s Hajj pilgrimage will be the second under the exceptional circumstances of the COVID-19 pandemic, and takes place as new variants of the coronavirus continue to emerge. He added that the decision to limit Hajj to 60,000 pilgrims, all of them from inside the Kingdom, aims to protect them and ensure their rituals can carried out as safely as possible.

Abdul Rahman Al-Sudais, president of the General Presidency for the Affairs of the Two Holy Mosques, said the authority is working to put in place all possible health precautions, while also ensuring that the Hajj rituals can take place, the experience is enriched, and proper hospitality is provided in line with the Kingdom’s Vision 2030. He added that the presidency’s plans are based on a several pillars that highlight the values of generosity and hospitality in providing services to the pilgrims.

Regarding the provision of water to pilgrims, Al-Sudais said that the presidency will hand out bottles of sterilized Zamzam water. The latest artificial intelligence technology will be employed to distribute the water using robots and high-tech smart vehicles, he added, in accordance with precautionary procedures.

The presidency will provide more than 800 manual and electric vehicles to help people move around within the Grand Mosque and its courtyards, he said, and make it easier for elderly and disabled pilgrims to perform their rituals

Al-Sudais also revealed that about 5,000 workers have been recruited to sterilize the Grand Mosque, its courtyards and other facilities 10 times a day, using more than 60,000 liters of disinfectant and the latest cleaning technologies. The presidency also plans to provide gifts, including umbrellas and sterilizers, that will make it easier, safer and more comfortable for pilgrims to perform their rituals.

He added that the presidency’s plans, prepared in cooperation with the Ministry of Hajj and Umrah and other relevant authorities, include an increase in the number of paths for pilgrims to follow inside the mosque.