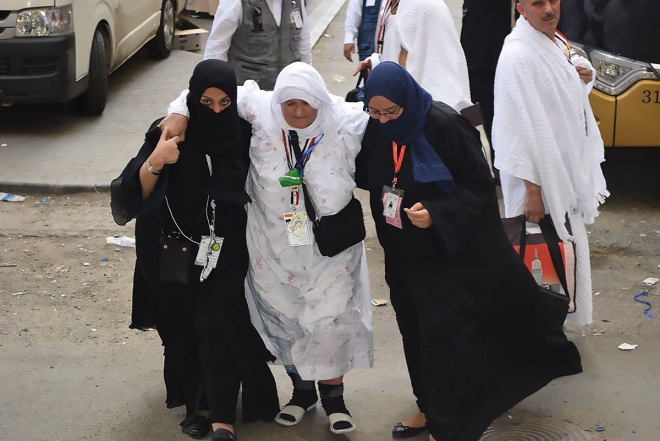 Every year, Saudi Arabia welcomes millions of Hajj pilgrims. It can be a bewildering experience full of new sights, sounds and smells as crowds move from place to place along the trail.

But pilgrims have never been left to fend for themselves, and they never will. The moutawefeen, or tour guides, are ready to help.

Some have been training their whole lives to help worshippers on their Hajj journey.

What many people do not realise is the profession has included women for more than eight centuries.

The Arabic word "teewafah" refers to someone who guides pilgrims around the mosques of Makkah, but their job description is much wider.

Aziza Kushak, 50, followed her father and grandparents into the profession.

"In the past, the moutawef would get a telegram which said, ‘You are looking after this number of pilgrims’, 50 for example, arriving at Jeddah port. So they start preparing," Ms Kushak says.

The moutawef collects worshippers from the entrance to Makkah and travels with them, hosting the group in his or her house.

"If the pilgrims' number is too big, he rents a nearby house," Ms Kushak says.

The guide offers religious guidance to the group in Makkah until they begin their journey to Madinah. Pilgrims also meet al zamzami in Makkah, another role that is required to provide Zamzam water to pilgrims.

Once in Madinah, worshippers meet the last type of teewafah, known as al daleel, who organises logistics such as the visit to the holy sites, such as Quba Mosque, the first mosque built during Islamic era.

Ms Kushak, who works as an academic when she is not guiding Hajj pilgrims, says her childhood home was always bustling during Hajj.

"Every single person had a designated task. As I was the youngest, my task at 5 years old was to go daily to the floors where the pilgrims were staying and ask them if they needed anything," she says.

As she grew older, she was given more responsibility, such as keeping a ledger of who was staying at the home.

Ms Kushak says the participation of women in the organisation of Hajj is especially vital for emotional support.

"Hajj is difficult, no one can deny that, and it is hard on both the pilgrims and the moutawef. So when both are tired, they might be nervous, so that is when the female moutawefa brings balance," she says.

Ms Kushak considers the job to be a "beautiful job, a career of passion and love".

Wejdan Bugis, 43, echoes that sentiment. She works as a kindergarten teacher during the rest of the year and says "the teewafah career is something God honoured us with".

Her family have served as moutawefeen for more than 100 years. Her great-grandfather, from Java island in Indonesia, would accompany the pilgrims to Hajj each year. Her grandfather settled in Makkah about 90 years ago.

"My grandfather, like many moutawefeen back then, would travel to East Asia and explain to the people a lot of Islamic matters and help them arrange for their Hajj,” Ms Bugis says.

It was common for male and female moutawefeen to remain in South-East Asia for three or four months and advertise their services to make the long boat journey worthwhile.

Ms Kushak, whose family served only Arab pilgrims, including those from Egypt, Syria and Iraq, says moutawefeen would only stay in those countries for a few weeks because they were near by.

When these pilgrims arrived in Saudi Arabia, they would know which moutawef they were staying with.

Ms Bugis began her career from a young age, when the pilgrims came to her grandfather’s house.

"My grandfather was the one to receive them, host them, feed them, house them, even teach them religious matters," she says.

"Therefore, I became accustomed to this profession until I reached adulthood and began to understand the role of women in it as well.”

She says it was customary for women stand to be shoulder to shoulder with men and help the pilgrims.

The role of women had been in decline by the time the career became professionalised in 1979.

Faten Hussain, who supports women in teewafah and is a moutawefat herself, says they were singled out at the time.

She has written several articles to change the statutes and in 2013 published a book about the history of women in teewafah to highlight their importance.

During those years, the women volunteered to help, she says.

Thirteen years ago, she founded the Voluntary Women's Committee at the South Asia Foundation.

“It started with five women then reached 35," she says.

Women are passing the tradition on to their children. Ms Kushak’s three daughters have been helping pilgrims during Hajj for years.

In her second year, she worked in customer service, taking calls from pilgrims in need of help with directions.

"The thing that is nice about Hajj is that each year you do something new and different,” she says.

She says the work is part of her family history. “I think being part of the whole legacy of your family and generations who actually work closely with the pilgrims is very fascinating for me," she says.