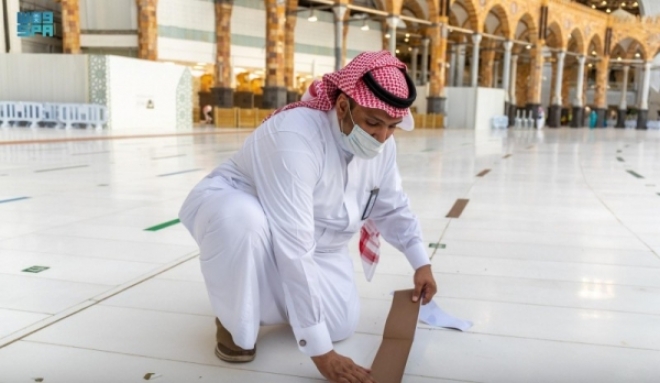 MAKKAH — The General Presidency for the Affairs of the Two Holy Mosques has realigned special tracks for performing tawaf, placing new physical-distancing floor stickers on mataf (circumambulation area around the Holy Kaaba) as part of the preparations for the upcoming Hajj pilgrimage.

The realignment has been made in a way ensuring the necessary physical distance between each pilgrim in compliance with the precautionary measures and preventive protocols to stem the spread of coronavirus.

There are a total of 25 special circular tracks on mataf in addition to four tracks on the ground floor and five tracks on the first floor of the mataf building, in anticipation of the expected increase in the number of Hajj pilgrims.

The presidency, represented by the General Department of Crowds and Grouping, has completed the work of removing the old stickers and placing the new ones to facilitate the movement of pilgrims during their circumambulation. Special tracks have been earmarked for wheelchairs of the elderly and people with special needs.

The presidency has realigned the stickers in proportion to the number of pilgrims at the mataf and the ground and first floors of the Grand Mosque, in line with the presidential plan for this year’s Hajj season.

Osama Al-Hujaili, director of the General Department of Crowds and Grouping at the Grand Mosque, said that stickers were also placed to facilitate the pilgrims to perform two rak’ahs of voluntary prayer after tawaf as well as at the prayer areas of the King Fahd Expansion. Al-Hujaili said that his department seeks, through these procedures of physical distancing, to enhance the safety and comfort of pilgrims.