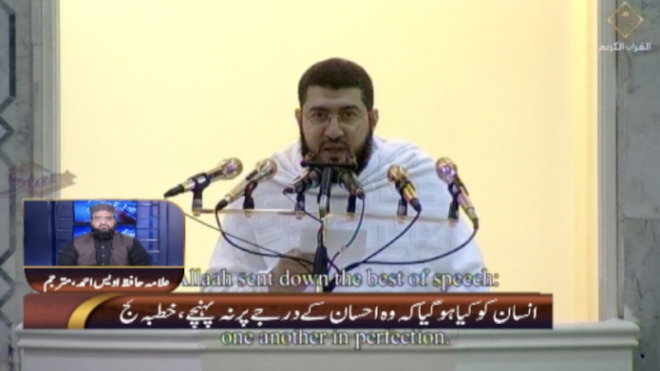 Sheikh Bandar Baleela, one of the muftis of the grand mosque, delivered the Hajj sermon on Monday.

"O people of faith, be afraid of Allah, it will give you success in this world and after," said Sheikh Baleela in his sermon. Allah has always given the order to do justice and good deeds, he said.

Prophet Mohammad (PBUH) had instructed followers to pray as if they can see Allah or firmly believe that He is watching over them. Namaz is offered for Allah, and people must only worship Him. Mosques are for Allah only and no one else should be worshipped there, he said.

“One should also have faith in His angels, His books, His prophets, on the Day of Judgement, and fate that everything good or bad is from Allah, in this life and Hereafter.”

Be good to your elders, and orphans. Don’t misappropriate orphans’ wealth. Allah has ordered us to be kind and faithful to orphans. Fulfil your promises.

To make society prosper, it is very important to be fair in financial matters, Sheikh Baleela said. All the matters that involve safeguarding the rights of others are very important for a society.

Don’t do anything that would spark conflict and mutiny, he said. “Allah has strongly condemned people who spread mischief, become a hurdle in way of peace----be it in the matters of Muslims or non-Muslims."

Sheikh Baleela said Allah has ordered us to forgive. “Even if you have enmity with someone, forgive them, be merciful to them.” Allah says it is not necessary if some has done wrong with you, you respond in kind.

In financial matters, Allah has ordered to benefit people and save them from losses. Allah says even if you talk to people, talk politely.

“Satan will always try to create conflicts among people, he is your enemy. “ Invite people to the way of Allah with rationale. Be nice even when you have to debate with people. If someone says Salam, respond in even better way.