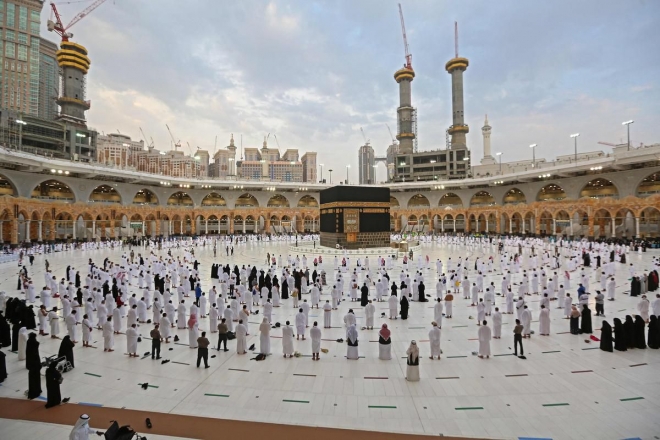 Before there was a human community in Mecca in the middle of Arabia, there was the Kaaba, a simple physical structure in a barren valley with not much to offer in greenery or physical beauty. But with passage of time, the sanctuary gained reverence across all tribal groups in Arabia. With this reverence came the status of the tribe residing within its perimeter as the guardians of the Kaaba and the caretakers of pilgrims.

This new found status was soon to be transformed into privilege, which was institutionalized through an elaborate process of legal and commercial decrees that granted advantages to the tribal alliances with Quresh, the main group in Mecca and the tribe to whom Prophet Muhammed traces his lineage.

One such privilege was related to the annual pilgrimage, Quresh and its allies would gather within the sanctuary and the rest of the pilgrims would gather at Mount Arafat, a few kilometres away, and then join the procession to circulate around the Kaaba as a sign of reverence.

Instituted as an irrevocable pillar of Hajj, Prophet Muhammed ordered all pilgrims to stand as equals at the mount of Arafat, abolishing any special status. Standing at Arafat became the climax of the Hajj and the tipping point of when the physical journey transforms into a spiritual encounter to overcome one’s prejudices.

As many Muslims perform Hajj this week, we must be reminded that no society is immune from the scourge of racism and its toxic legacy. Racism is a pervasive and multi-faceted practice that intersects with class, ethnicity, culture and even geography. Over the years, it becomes systemic in society as it permeates into its institutions and weaves into its culture. Systemic racism creates barriers for groups that are positioned as inferior to access power, resources and equality and can develop into violent racism where victimized groups are not only marginalized but oppressed and even killed.

Canada is reckoning with its systemic racism problem just like many other societies. Recent discovery of the unmarked graves of Indigenous children in a number of residential schools’ grounds exposed the dark legacy of systemic racism endured by the Indigenous communities for centuries. An estimated 6,000 of them perished. Remains just started to be unearthed.

In addition to the anti-Indigenous racism, other forms of bigotry such antisemitism, anti-Black racism and Islamophobia have similar debilitating effects on those communities. Recently, Islamophobia proved to be more deadly.

What has become clear is that we must confront and tackle systemic biases within our society and its institutions. This is an undertaking that must involve all of us, the government and the governed.

The recent commitment by the federal government to hold a July 22 National Action Summit on Islamophobia is a good first step. However, this summit must be purposefully grounded in action to address root causes. Systemic racism will be reversed if only recommendations are operationalized with clear and specific procedures and details for implementation, otherwise they will be hollow.

The government must commit to review its anti-terrorism laws and replace them with new fit-for-purpose alternatives that do not stigmatize the Muslim community. Recent reports exposing biased audits of Muslim-led charities by the Canada Revenue Agency call for immediate action.

As we reflect on the core message of Hajj, we are reminded that building a more equitable society was a human pursuit led by reformers and thinkers across the millenia. We should be on the right side of history on the quest for equality and fairness.