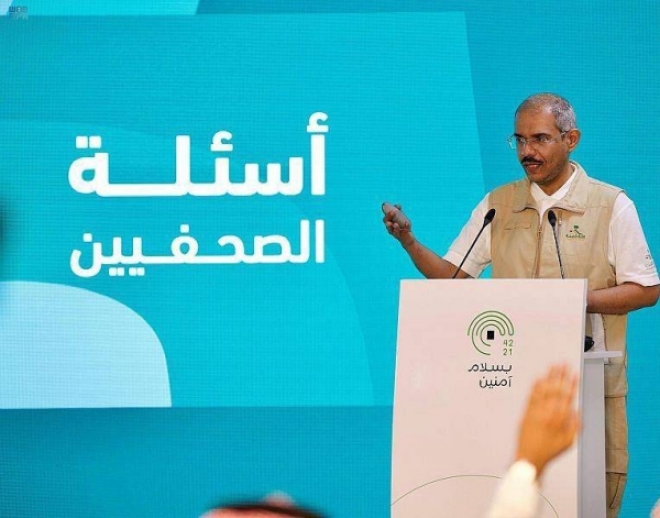 MINA — All pilgrims taking part in this year’s Hajj are in good health with none of them suffering from coronavirus or other infectious diseases, the spokesman of the Ministry of Health, Dr. Mohammed Al-Abdali, has said.

The health ministry spokesman made the remarks at a press conference for this year's Hajj season on Tuesday, with the participation of the Ministry of Interior's security spokesman, Col. Talal Al-Shalhoub and the Ministry of Hajj and Umrah's official spokesman, Hisham Bin Saeed.

Dr. Al-Abdali said that the clinics have so far received a number of cases mostly suffering from heat exhaustion, and six successful cardiac catheterization operations were performed.

He explained that the pilgrims are performing their rituals with ease while being accompanied by health services, whether clinics, centers, mobile services, or field teams to provide them with care.

He pointed out that health volunteer work is available this year under professional controls, training and supervision of the tasks provided by male and female volunteers, praising their contributions to the Kingdom's balance in the field of volunteering.

The health ministry spokesperson also expressed his optimism about achieving an epidemic-free Hajj season in light of the planning, organization and implementation accompanying all the Hajj's rites.

Dr. Al-Abdali stressed that the hospitals and the accompanying equipment, whether emergency, preventive or curative, were equipped at the highest levels to deal with various mild, severe, or critical health cases, supported by multiple specialties and advanced technologies, announcing the discharging of all inpatients in the Intensive Care Units.

For his part, the security spokesperson at the Ministry of Interior stated that the pilgrims returned to Mina after staying at Arafat in the day and in Muzdalifah during the night. They then performed Tawaf Al-Ifadah before the stoning ritual at Jamarat Al-Aqaba with ease and smooth, marking the completion of the first and second stages of Hajj security plans.

The third stage plan covers pilgrims' stay in Mina on Tuesday and during the days of Tashreeq in which they go to Jamarat for the stoning ritual.

He stressed that the agencies participating in the Hajj continue to carry out their tasks to provide all services to the pilgrims during their stay in Mina until their departure on the third day of Tashreeq, and to organize their performance of the stoning ritual at Jamarat.

He explained that no untoward incidents were reported during the Hajj, stressing the necessity of applying the instructions for precautionary and preventive measures, and adhering to the specified numbers during family gatherings and others in the blessed Eid season.


⇐ Previous:
Where there's a will there's a way, 17 disabled pilgrims make it true
Next: ⇒
Pilgrims continue stoning of Jamarat for second day during final phase of Hajj