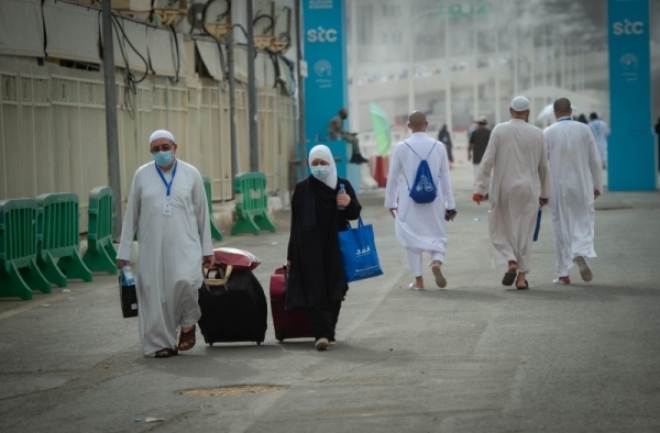 MAKKAH — Pilgrims started leaving Makkah on the evening of Thursday, the second day of Tashreeq (Ayyam Al-Tashreeq), after completing this year’s exceptional and downsized Hajj pilgrimage.

After completing the stoning ritual earlier, they left the tent city of Mina for Makkah to perform Tawaf Al-Wida (farewell circumambulation, marking the end of the pilgrimage. The pilgrims were seen in a spiritually elevated and euphoric mood after completing their lifetime spiritual journey.

The Grand Mosque received batches of pilgrims to perform the farewell circumambulation. The General Presidency for the Affairs of the Two Holy Mosques, represented by the General Department of Crowds and Grouping, has deployed all the facilities and arrangements to provide a world-standard system of integrated services for the departing pilgrims at the Grand Mosque.

Osama Al-Hujaili, director of the department, said earlier that the first phase of the farewell circumambulation would start with receiving pilgrims at three gathering points of Shobaika, Kudai and Ajyad that are located around the Grand Mosque.

Pilgrims started the stoning ritual this afternoon in an orderly and peaceful way in strict compliance with the coronavirus protocols. They stoned seven pebbles each, first at Jamrat Al-Sugra, then at Jamrat Al-Wusta, and finally at Jamrat Al-Aqaba in a ritual emulating Prophet Ibrahim’s stoning of the devil at the three spots where he is said to have appeared trying to dissuade him from obeying God’s order to sacrifice his son, Ismail. The ritual is the renunciation of evil in all its forms and a promise never to fall prey to the machinations and intrigues of Satan, the cursed.

A huge contingent of security forces and Civil Defense personnel as well as health workers were seen at various points at the mammoth state-of-the-art Jamarat complex, to oversee the smooth conduct of the stoning ritual. The stoning ritual was held under careful preparation and high precautionary measures, to achieve physical distancing between pilgrims and preserve their safety as well as those who were involved in serving them.

The pilgrims’ movements to Jamarat Complex were planned under preventive protocols, where each phase of throwing Jamarat was done safely and in a healthy manner. The movements of pilgrims were under specific colored paths. This was done under coordination with the relevant security and civil sectors participating in the Hajj operation.

After reaching their accommodation at Mina residential towers and camps, pilgrims packed their baggage and boarded buses that took them to Makkah to perform Farewell Tawaf. Although Hajj, one of the five pillars of Islam, concludes officially on Friday, the third day of Tashreeq, pilgrims are allowed to leave a day earlier.

Most pilgrims will leave Makkah on Thursday while some pilgrims from remote regions of the Kingdom would stay back for some time depending on the schedule of their departure flight.