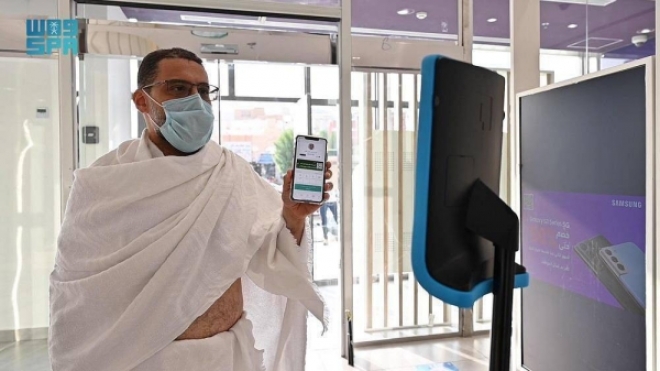 MINA — It took Ibrahim Siyam seven hours to find his children who lost their way in heavy crowds during Hajj some 30 years ago, but Saudi Arabia’s use of smart cards containing pilgrims’ data for the first time during this year’s Hajj has dispelled such fears.

The 64-year-old Siyam recalls his bitter past experience, saying: “During the Hajj pilgrimage in 1993, I lost my sons and I could not find them for seven long hours... Now I no longer dread such a prospect doing this year's Hajj with my wife and other companions, thanks to the smart card,” he said while pointing to the card that he hung with a yellow ribbon around his neck.

“We use the smart card in all our movements, such as riding buses, entering the Grand Mosque as well as reaching our camp and bed. The use of technological means is important to keep pace with the developments and requirements of the new era,” said Siyam, who came from Dammam to Makkah to perform Hajj.

“I got lost in Mina during a previous pilgrimage and I could not locate my tent, as the camps looked all similar to each other,” said Hazem Rihan, 43-year-old Egyptian veterinarian.

“Before introducing the card this time, things were completely different,” said pharmacist Ahmed, who came from Jeddah. “We would miss or be late for prayers sometimes. For the first time, I applied for Hajj online. Things went smoothly as I completed all the procedures including submission, acceptance, payment of cash and taking print out of all documents without any human contact,” he said.

More than 58,000 pilgrims, who received two doses of vaccine against coronavirus, performed Hajj this year. The Ministry of Hajj and Umrah introduced Hajj smart card and smart bracelet for this year’s Hajj for the first time.

The smart card is linked with all services being provided to the pilgrims, such as their entry to hotels in Makkah and tents in the holy sites as well as their using of means of transportation.

In a televised speech Tuesday, Custodian of the Two Holy Mosques King Salman affirmed that the digital Hajj system aims to reduce human cadres in managing crowds and organizing Hajj to ensure the safety of pilgrims and those serving them.

Deputy Minister Hajj Amr Al-Maddah said that the launch of the card establishes a digital phase ahead in which all transactions will be managed in a smart and contactless manner. He pointed out that it will also serve as an electronic financial wallet in the future, thus eliminating the need for pilgrims to carry cash.

The card can be used in payments through points of sale as well as to guide lost pilgrims on to their camps, governing access to camps and timing of grouping and transportation. It aims to facilitate the movement of pilgrims to and from Makkah and reduce the waiting time for buses that transport them between Makkah and the Holy Sites. The card also enabled pilgrims to bring down the human contact to the minimum.

The smart card includes the pilgrim’s basic personal and health data, the registration number, his exact place of residence in Makkah and the holy sites, and the name and phone number of the organizer of his trip. The card is equipped with a barcode that can be read electronically. The cards bore the colors yellow, green, red and blue, and the authorities drew paths in the same colors on the ground to guide the pilgrims.

Upon its launch, the Ministry of Hajj and Umrah explained that the card will help track any pilgrims who have lost contact, as organizers can know all the data of pilgrims by reading the bar code in their cards with an electronic scanner.

At the checkpoints in Makkah, security personnel board the buses using scanners to verify the data of pilgrims recorded on their smart cards within a few minutes.