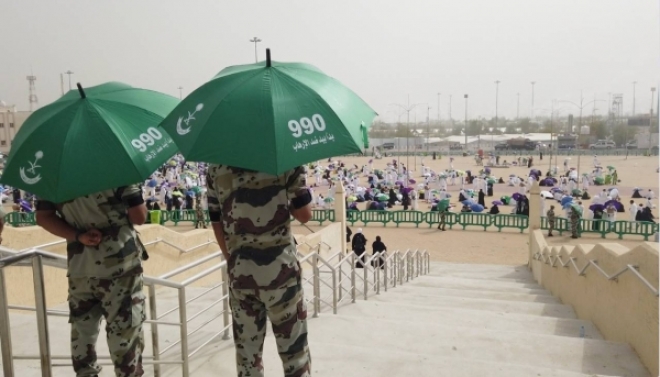 MAKKAH — Apart from playing the all-important role of maintaining national security, the Presidency of State Security has mobilized its qualified human cadres, advanced technologies and modern mechanisms in serving the guests of God for this year’s annual pilgrimage of Hajj.

With the launch of the Center for Security Information with a uniform toll-free number 990, the presidency aimed to build bridges of communication and contact with citizens and residents in the Kingdom, enlisting their support in the fight against terrorism and extremism.

The public can contact the center to report any suspicious places or people who cherish extremist ideas, in a professional and confidential manner, and eventually, the center will transfer these reports to the competent authority to verify the authenticity of the information and deal with it. By doing so, the center has been instrumental in making major headways in combating terrorism and successfully foiling terrorist plans.

However, during the Hajj season, the center contributed to providing humanitarian services to pilgrims throughout their journey at the holy sites. The presidency’s various sectors such as the General Directorate of Investigation (Mabahith), Special Security Forces, Special Emergency Forces, Aviation Security Forces and the General Administration of Technical Affairs played a remarkable role in achieving a hassle-free and safe Hajj. It deployed a security cordon and a safety valve around the clock to make the Hajj season a great success and to prevent violators from entering the holy sites through mountain roads and valleys surrounding Makkah.

These forces are also involved in crowd management, as well as in maintaining security, preventing accidents, linking the air to the ground, and providing various information to operations centers. During the Hajj season, the Presidency implemented many different tasks together with other security sectors. They have put a security cordon on the western side of the Arafat area to prevent the entry of illegal pilgrims, using the latest technologies from high-level thermal monitoring and scanning devices to stop violators and apply the penalties stipulated against them.

On Arafat Day, the forces were engaged in managing crowds at Namira Mosque and organized the ascent to the Mount of Mercy in a smooth and orderly manner with the application of physical distancing. The rapid intervention units were deployed in a number of locations in Mina and Muzdalifah to tackle the security situation in a timely manner, while the entry and exit operations to Jamarat are carried out according to the prescribed timetable.

The forces also managed the crowds in the courtyards of the Grand Mosque by streamlining the flow of pilgrims and ensuring the safety of everyone. The presidency participated in the Hajj operation, deploying special units of highly trained and equipped personnel in rapid intervention in all circumstances and at all locations.