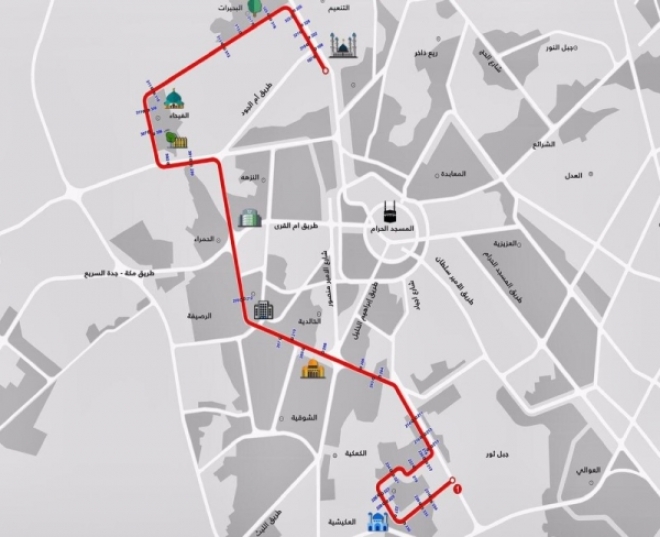 MAKKAH — The Makkah Public Bus Transport Project has fixed seven bus routes and their stops upon the completion of the project.

The second route starts from the Al-Nawwariya neighborhood and reaches the Jabal Al-Kaaba station in the central region, with a length of 40 km and 35 stops.

The 71-km-long third route, which starts from the Kudai neighborhood and reaches the Al-Shuhada neighborhood, will have 68 stops and pass by Umm Al-Qura University and Umm Al-Mu’minin Zainab Al-Hilaliya walkway, the Kudai and Markazi parking area, the Makkah Museum and the Al-Kakiyyah vegetable circle.

The fourth route, which is 50 km long with 62 stops, starts from the neighborhood of Kudai to the Grand Mosque Road and passes through the Jinn Mosque, Al-Ma’ala Cemetery, Makkah Mayoralty, Makkah Emirate, Dhi Al-Majaz Market, Al-Naseem Walkway, Al-Noor Specialist Hospital, Kudai parking and the King Abdulaziz Plant for Zamzam water.

The seventh route starts from Al-Haramain High-Speed Train station in Rusaifa and reaches Jabal Omar in the central Haram area, with a length of 10 km and 13 stops, and passes through Rusaifa, Al-Dawareq Square and Al-Khalil Square.