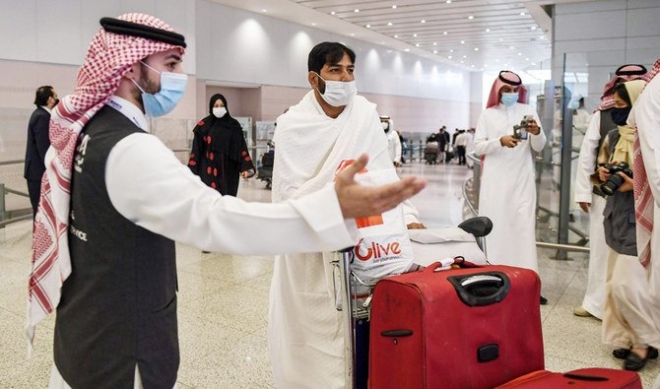 MAKKAH: Hundreds of companies are gearing up to receive fully immunized foreign pilgrims wishing to perform Umrah from Aug. 9.

Via an online platform, pilgrims will be given access to 500 businesses providing access to flights, transport, hotels and Umrah companies.
Hani Al-Omairi, a member of the National Committee for Hajj and Umrah and the Hotels Committee in Makkah, told Alarabiya that nearly 30 websites and platforms will be available for international reservations.

“Health courses and crowd management courses were given to all employees as several companies have commenced operations. Procedures for the rest of the companies and institutions are being finalized by the Ministry of Hajj and Umrah and other relevant authorities,” said Al-Omairi.

Commenting on the news, Mohsin Tutla, chairman of the World Hajj and Umrah Care Foundation, told Arab News the return of pilgrims could be ensured through training the industry to provide services under pandemic conditions. He added that the introduction of vigilance technology throughout the pilgrimage and further measures would help smoothen the process.

Tutla told Arab News that the demand from pilgrims to conduct rituals during the pandemic is not as high as people may think.

“Even though we can assume that people have been queuing to perform Hajj and Umrah, the reality is that people’s financial capability has been depleted.

“Where Hajj and Umrah were available and easy for the mass population and the middle income population, it is now only possible for the rich and thrifty savers.”

Tutla added: “The road to recovery and rejuvenation is not dependent on only demand, it is dependent on the development of global safety mechanisms such as the Hajj and Umrah Safe Corridor, which is currently being developed by the World Hajj and Umrah Care Foundation, and is being installed in 25 countries worldwide.

“Globally you will realize that demand would have dropped by approximately 40 percent for international Umrah and 15 percent for international Hajj pilgrimages.” Following the temporary closure of Umrah due to the emergence of the pandemic, worshippers were allowed to perform the Umrah rituals in early October. As many as 250,000 domestic pilgrims were able to register, book appointments and granted permits in the first phase.

Some 10,000 foreign pilgrims were gradually allowed back into the Kingdom in the third phase on Nov. 1 after a seven-month hiatus of strict regulations.