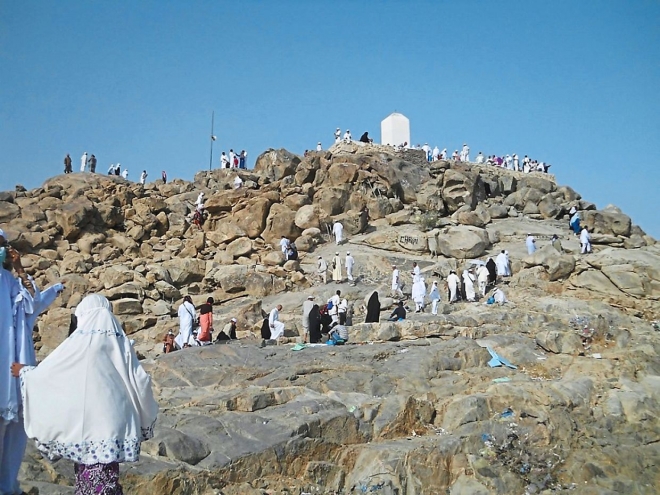 Recently, Muslims celebrated Hari Raya Aidiladha, also known as the Feast of Sacrifice. And for the second time this year, I am not able to celebrate Hari Raya with my parents as they live in Jitra, Kedah, and I am in Selangor.

As we all know, the interstate travel ban is still on during this pandemic.

However, the festival did bring back some memories of when I performed the umrah (minor Islamic pilgrimage) in Mecca with my mother in 2014.

It was a true journey of spiritual awakening for me, and an extra special one too as we flew to Mecca on my birthday.

The pilgrimage is a religious procession, and there are a few rituals and rules one has to adhere to when performing it. One of the rituals includes observing the state of purification known as ihram. You do this by professing your sacred intentions to Allah, and donning a white piece of cloth as a robe. For men, wearing clothing that has been stitched is not allowed.

The writer wearing the ihram robe, with his shaven head in Mecca.

Muslims must enter the state of ihram before they are able to cross any pilgrimage boundaries known as miqat, in order to perform the umrah or the haj (major Islamic pilgrimage). The miqat is marked on several locations, and for Malaysians travelling into Mecca by air, our miqat is located at a place called Qarnul Manazil.

When our plane was about to fly over the Qarnul Manazil, the pilot made an announcement so that pilgrims were able to observe ihram.

Apart from ihram, there are three other important rituals that pilgrims must undertake during umrah: The tawaf, saie and the cutting of your hair.

Tawaf is the circumambulation of the Kaabah for seven times, while saie involves running back and forth between two small hills (Safa and Marwah) for seven times. Pilgrims must also either shave their heads or cut at least three strands of hair.

When we perform the tawaf, we must face a certain direction (basically, our left shoulder needs to be the closest to the Kaabah).

The story behind the saie is very meaningful and revolves around the Prophet Ibrahim’s second wife Hajar, who was left in the desert in Mecca with her son, Ismail (who would later become a prophet himself). To survive, Hajar went back and forth the hills of Safa and Marwah in search of water and help. After seven times of doing this – and all the while praying to God – water started miraculously spring from under her feet.

It is believed that this is the source of the Zamzam well, which is highly revered by Muslim pilgrims to this day.

Lastly, the cutting of hair symbolises that pilgrims are ready to break out of their state of ihram.

We arrived at our hotel in Mecca around midnight. I was already quite tired from the 12-hour flight, but my mother said that since we were already in the state of ihram, we should just continue to perform our first tawaf.

The hotel was only 650m away from the Kaabah, but I remember being so sleepy that I kept dragging my feet along the way.

Nevertheless, once I saw the majestic Masjidil Haram (the mosque complex that surrounds the Kaabah), I suddenly felt energised and no longer tired or sleepy. I couldn’t believe that I was seeing the Kaabah with my own eyes!

All my life, I had been praying towards the direction of this sacred place – being there in real life was so wonderful.

After the tawaf, we continued with the saie, and finally, once we were done with all the other rituals, I shaved my head.

We spent seven days in Mecca and we visited some significant places for Muslims such as the Mount Arafat or Jabal Rahmah, which is believed to be the meeting point of Adam and Hawa when they fell from Heaven.

After a week in Mecca, we went to Medina which was a six-hour journey by bus.

Somehow, we were more relaxed during the rest of our tour in Medina. I guess it was because there were no rituals which we had to follow there.

We visited the tomb of Prophet Muhammad at the Masjidil Nabawi, and Mount Uhud, and learned a lot about the history of each place.

We also went to date farms, and had some sweet treats.

Even though Hari Raya Aidiladha is associated with haj, I hope this story on umrah will be useful for those who are curious about Islamic pilgrimages.