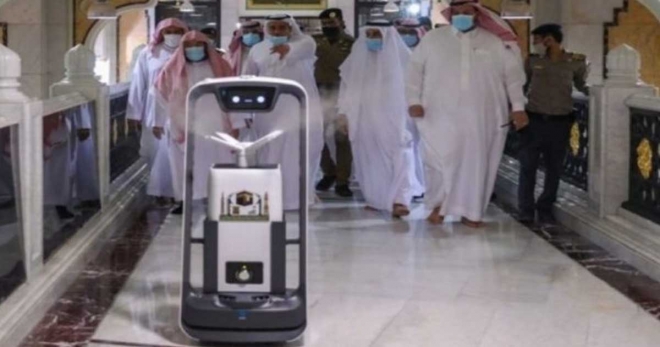 Taking due advantage of artificial intelligence in the post-pandemic era, the Saudi government has introduced a robot to ensure optimal cleaning and disinfection of Masjid al-Haraam’s floor without any human intervention.

After setting robot project of Zamzam water distribution, Masjid al-Haraam sterilization Robot and Visitor Orientation Robot, the operation of the intelligent robot to disinfect Masjid al-Haraam is one of the first post-pandemic achievements.

The General Presidency for Affairs of Masjid al-Haraam and Masjid an-Nabawi (GPH) has become a pioneer in the exploitation of intelligent technology since it started to utilize artificial intelligence for the service of the pilgrims.

Director of GPH, Shaykh Abdur-Rahmaan As-Sudays (PhD) said the objective of robot use was only to meet the requirements of Vision 2030.

It is an “Intelligent Disinfection Robot” which can work for four hours, with a capacity of more than 68 liters of water and can clean more than two thousand square meters per hour.

Sudays stressed that the use of intelligent robots and modern technological means reinforced the role of efficient intelligent technology aimed at improving the services provided to visitors of Masjid al-Haraam.

He said as COVID pandemic had forced humans to adopt a new way of life on all fronts, GPH had also to adapt to these changes imposed during the pandemic.

GPH launched during this period many pioneering projects relying on the potential of artificial intelligence.

As-Sudays said the GPH has taken care to exploit new technological means, computer software, the best innovative technologies and business intelligence to achieve institutional excellence and ensure effective management of human resources as well as operational aspects relating to the actions that it leads.

He said the new intelligent technologies will enable the pilgrims of the Two Holy Mosques to perform their worship rites with ease.

He said the disinfectant robot had multiple mini-cameras, upper and lower detectors, seat belts as well as a detector capable of spotting objects, which allows it to avoid collisions with people or with obstacles on the ground.

Weighing 300 kilograms, the robot has tank with a capacity of 68.14 liters of water for clean water as well as the sucked water.

In just one hour, it can clean and disinfect an area of ‪2045.26 square meters with a maximum speed of 5 km per hour. The equipment is easily rechargeable and energy-saving besides being equipped with eight cameras linked to distance sensors.

The noiseless robot also has the functionality to send SMS and photos to a phone number associated with it.