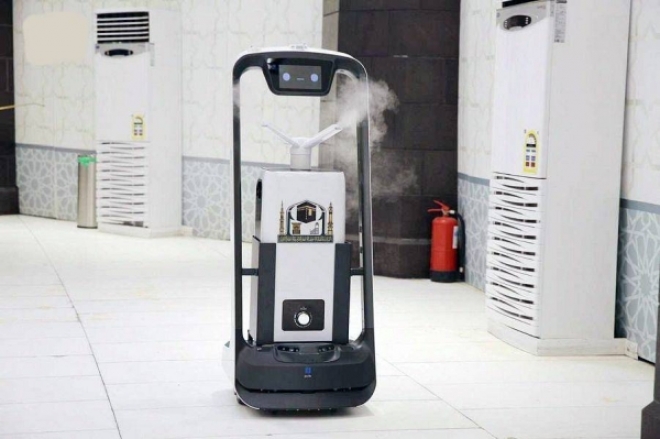 MAKKAH — The General Presidency for the Affairs of the Two Holy Mosques is working on plans for the comprehensive development of services being provided at the Two Holy Mosques in accordance with the latest international studies and service standards, using artificial intelligence and modern technologies.

The General Presidency's robots work with an automated control system programmed on a pre-map, and at six levels, improving the environment and analyzing cleaning, sterilization and disinfection requirements.

The robot dedicated for sterilization and distribution of Zamzam water has received the Simultaneous Localization and Mapping (SLAM) patent. The robot works from 8-5 hours without human intervention, and has a capacity of 23.8 liters. It also contributes to eliminating bacteria in an area of 600 square meters.

Another use of modern technology is the Smart Robot, which performs high-quality floor washing and disinfection operations for a period of 4 hours without any human intervention.

It also uses cameras, ground and overhead sensors, and the feature to read small and large objects to prevent collisions with people or objects on the ground.