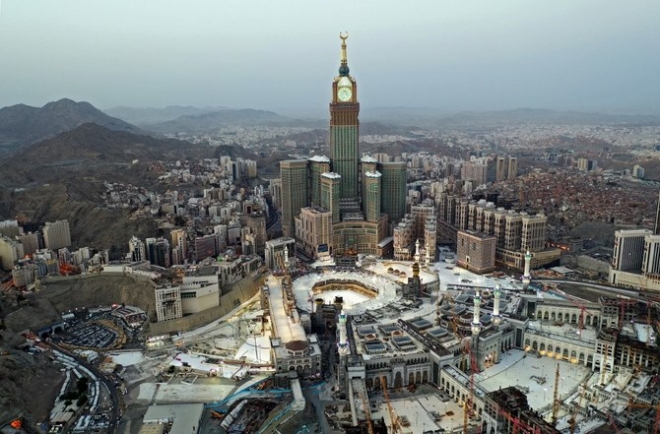 The Saudi government took advantage of lower pilgrim numbers during the COVID-19 pandemic to accelerate the development of mega-projects, the managing director of an iconic hotel complex in Makkah said.

“The Kingdom has worked really hard for the past two years on mega-projects related to Makkah and Madinah such as the third expansion of the Grand Mosque in Makkah and construction of a new road leading to it,” the group managing director of four hotels in Makkah’s King Abdulaziz Endowment (Abraj Al-Bait complex) Salem Al-Shahrani said.

Al-Shahrani was recently appointed to his post as managing director of the Raffles Makkah Palace, the Makkah Clock Royal Tower, Swissotel Makkah, and Swissotel Al-Maqam Makkah.

All situated in the landmark Abraj Al-Bait complex that overlooks the Grand Mosque, the hotels offer spectacular views of the Kaaba and the city center.

“The Saudi government is trying to make Makkah an iconic city in terms of infrastructure,” Al-Shahrani explained.

“The project to build a new main road to the Grand Mosque has been accelerated and it will facilitate a beautiful arrival experience for pilgrims,” Al-Shahrani said.

He also explained that foreign pilgrims have not had a chance to experience other facilities that were completed just before the pandemic struck and can look forward to doing so when they visit.

These include King Abdulaziz International Airport’s new Terminal 1 that opened in September 2019 and its Haramain High Speed Railway station that opened in December 2019.

The managing director said that although most of the guests currently staying at the hotels he manages are domestic pilgrims, British and European pilgrims are starting to visit Makkah too.

“British pilgrims have started arriving and staying in our hotels. They are small groups but we aim to increase volume. We are also hoping to host pilgrims from Indonesia, Egypt, Turkey, and other countries soon,” he said.

The Kingdom allowed entry to vaccinated foreign Umrah pilgrims in August and the two holy mosques started operating at full capacity in October.

“We are aiming to host a similar number of pilgrims to 2019 levels or less than than that by 10-15 percent: 2019 figures are the benchmark for us,” Al-Shahrani said.

“We are hoping that there will be less restrictions by the end of this year but our main priority is that Muslims can perform Umrah and Hajj in a safe environment,” he said.

“People from the UK have started to visit Makkah again and this is a good sign. There is light at the end of the tunnel after two years of people not traveling to Makkah and Madinah. I am very optimistic. I think we will have a good Ramadan and Hajj season in 2022.”

The Makkah Clock Royal Tower, a Fairmont hotel and the focal point of the Abraj Al-Bait complex, received an award from the Council of British Hajjis last week recognizing its marketing initiatives during the Kingdom’s COVID-19 lockdowns.

The award was presented to Al-Shahrani at an Umrah+ Connect event hosted by the CBHUK in London that aimed to explore how Umrah travel businesses could enhance the experience they offer to pilgrims by incorporating visits to other parts of the Kingdom into their packages.

One of the tallest buildings in the world, the tower displayed messages encouraging people to stay at home and adhere to government measures to curb the spread of the coronavirus during lockdowns in the Kingdom.

“At a time when Makkah and the rest of the world came to a lockdown, Fairmont Makkah delivered key public health messages and gave the world’s Muslims hope through the clever use of the iconic Makkah Clock Royal Tower,” CBHUK’s chief marketing officer, Shamim Ali, said.