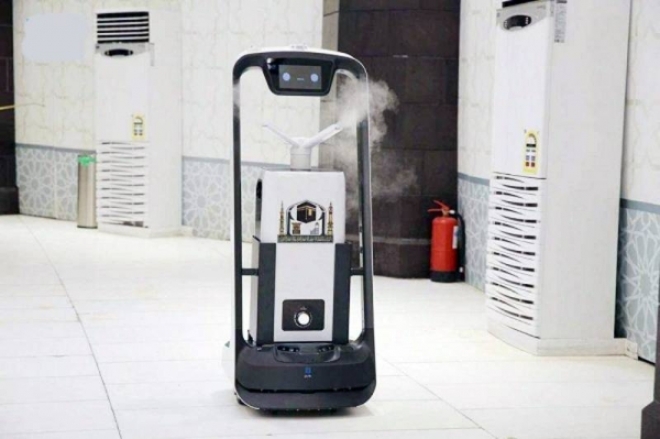 Among these services is the guiding smart robot that helps pilgrims and Umrah performers to perform their rituals, offering Ifta services and answers the questions of visitors, with the possibility of adding instant translation to several languages.

This is in addition to communicating with sheikhs remotely and setting directives in more than one language. The robot, which is controlled remotely, supports 11 languages: Arabic, English, French, Russian, Persian, Turkish, Malawi, Urdu, Chinese, Bengali and Hausa.

The robot also includes a 21-inch touch screen that can be used to serve several issues of concern to visitors of the Grand Mosque, such as guiding and expressing an opinion. The four wheels robot is equipped with a smart stoppage system that allows it to move seamlessly and flexibly, in addition to having high-quality cameras for transmitting.

This is done via transmitting from inside the Grand Mosque for those who want to improve recitation and receive certificates, and for visitors of the Grand Mosque, or those willing to receive education remotely through six languages: Arabic, English, Urdu, Indonesia, Malawi and Hausa.

The presidency, represented by the General Administration for Qur’an and Books also launched the “Smart Qur’an”, which is an e-device, with the aim of serving visitors of the Grand Mosque with visual disability, which is dedicated for reading the Holy Qur’an in Brail language, where this copy of the Holy Qur’an is small in size and easy to use in terms of moving between pages of the Qur’an. — SPA