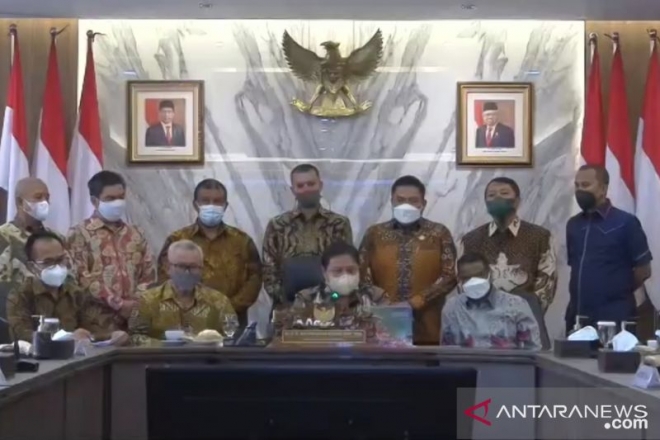 Jakarta (ANTARA) - Coordinating Minister for Economic Affairs Airlangga Hartarto confirmed to Indonesia having received a diplomatic note from the Kingdom of Saudi Arabia regarding discussions centering around holding umrah.

"We can start the discussion regarding umrah. This is particularly to resume the umrah pilgrimage in Saudi Arabia from Indonesia once the condition has been set by the two parties," Hartarto, concurrently head of the COVID-19 and National Economy Recovery Handling Team, noted during an online press conference, Tuesday.

Later, Saudi Arabia allowed the Sinovac and Sinopharm vaccines in the country, completed by a vaccine booster.

"Responding to this matter, the religious affairs minister will conduct diplomacy with its Saudi partners and will immediately send a team this week," he remarked.

Health Minister Budi Gunadi Sadikin will thereafter also communicate with the Ministry in Saudi Arabia to elaborate on the condition of COVID-19 handling in Indonesia that is under control and has received level 1 recognition from the World Health Organization (WHO).

Likewise, several countries, such as Australia, Singapore, and the United Arab Emirates, have also recognized the effectiveness of the Sinovac and Sinopharm vaccines.

"With various countries having acknowledged (the efficacy of) Sinovac and Sinopharm vaccines along with our ability to handle COVID-19 in the country, we hope for umrah pilgrimage to resume in Saudi Arabia," Hartarto noted.

On the same occasion, Chairman of the Hajj and Umrah Travel Agency Association (Forum SATHU) Fuad Hasan Masyhur noted that his meeting with Hartarto aimed to provide inputs and highlight expectations regarding the Hajj and Umrah industry that had not been active for two years.

“The coordinating minister has offered a glimmer of hope, not only to us as an agency but also to the public. By God's will, we will return to the Baitullah," he affirmed.