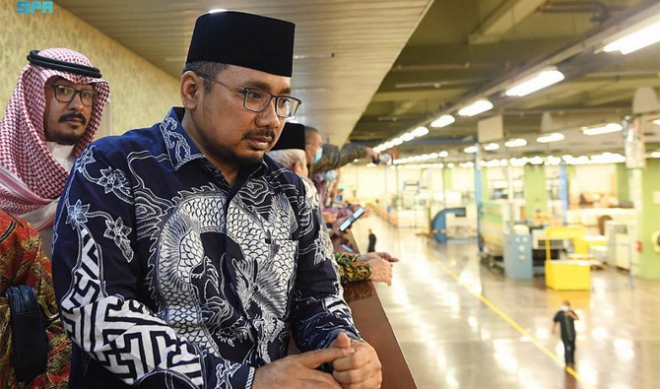 He was received by the secretary general of the complex, Talal bin Razen Al-Rehaili.

The Indonesian minister was briefed on the work process in the complex, the phases of printing the Holy Qur’an, and the modern technologies used.

He praised the care and attention paid by Saudi Arabia’s leadership to serve visitors to the Prophet’s Mosque.

The King Fahd Holy Qur’an Printing Complex was established in 1985 to produce and distribute Islamic print and audio publications, as part of the leading role played by the Kingdom in serving Islam and the needs of Muslims worldwide.

As the name suggests, the plant prints the Qur’an. It also records recitations in a variety of styles popular across the Islamic world, offers translations and interpretations, presents the sciences of the Qur’an, publishes the Prophet’s sunnah and biography, along with Islamic research, and delivers its work through global networks.

Its priorities include maintaining the highest levels of quality and precision, translating the Qur’an into a wide range of languages, and distributing publications in print and online to Muslims around the world. It adopts a unique surveillance and supervision method unlike any used by other printers around the world to ensure accuracy in the Qur’an’s text.


⇐ Previous:
Noorul Haq Qadri departs for Saudi Arabia to discuss Umrah resumption
Next: ⇒
Travel requirements in all countries of world can be checked through Tawakkalna app