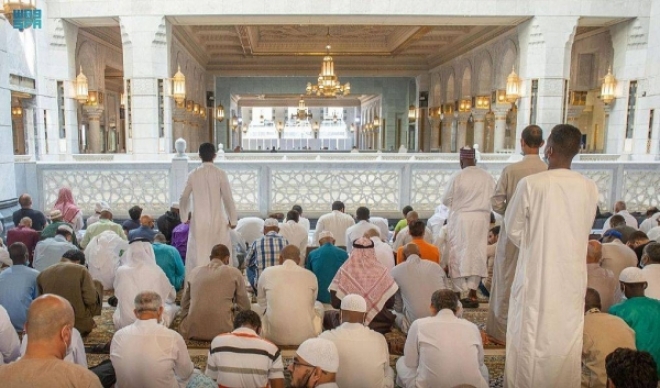 MAKKAH - The General Presidency for the Affairs of the Two Holy Mosques has readied the Third Saudi Expansion of the Grand Mosque to receive Umrah pilgrims and worshipers.

The expansion constitutes an important addition in receiving worshipers, given the large numbers of prayer spaces it contains, in addition to its crowd control mechanism and large number of corridors between prayer areas.

The expansion also includes squares, especially the western ones, which also consists toilets and spacious corridors.

Director of the General Administration of the Third Saudi Expansion at the Grand Mosque Eng. Walid Al-Masoudi said that the escalators were operated to facilitate the movement of worshipers between the floors of the new expansion area of the Grand Mosque.

Al-Masoudi said that there are integrated services within the Third Saudi Expansion, such as perfuming carpets at regular intervals, providing refrigerated Zamzam water, and making available of the copies of the Holy Qur’an in different languages.

“All these create the spiritual atmosphere for the pilgrims to perform their rituals in ease and comfort, as well as to provide the best services for pilgrims and visitors to the Grand Mosque,” he said.

In July this year, the presidency authorities have resumed the third phase of the expansion project with construction, electromechanical and architectural finishing works at the Grand Mosque after a halt of more than a year following the outbreak of coronavirus.

The third and the largest expansion of the Grand Mosque has increased its area to 1.5 square km with the two previous expansions being launched by King Fahd and King Abdullah in 1989 and 2008 respectively at a cost of SR 375 billion.

Phase 3 expansion, launched by Custodian of the Two Holy Mosques King Salman in 2015, increased the mosque’s area by two-thirds. It involved five major projects including the extension of the mosque’s main building, in addition to constructing an arena, a pedestrian tunnel, upgrading the central service station, and developing the first ring road surrounding the mosque.


⇐ Previous:
Tunisia: Over 219,000 applicants register for 2022 Hajj season
Next: ⇒
Saudi Arabia to issue Umrah permit for all foreign pilgrims aged 18 and above