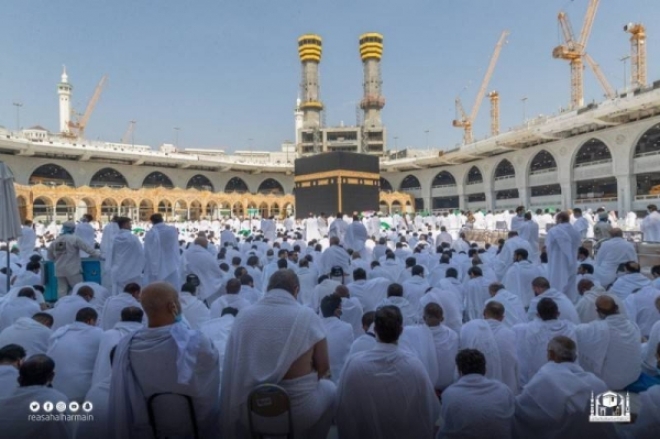 MAKKAH – The Ministry of Hajj and Umrah has canceled the maximum age limit of 50 years as a prerequisite for pilgrims coming to perform Umrah from outside Saudi Arabia, Okaz/Saudi Gazette has learnt from well informed sources.

Earlier, the ministry has set the age limit of the minimum 18 years and maximum 50 years to book an appointment and issue permit to perform Umrah, as well as prayer at the Grand Mosque and Al-Rawdah Sharif at the Prophet’s Mosque and visit the Prophet’s grave following the easing of restrictions that were imposed since the outbreak of coronavirus.

Under the new regulations, the elderly foreign pilgrims can come to perform Umrah and that is in line with the precautionary measures and preventive protocols to stem the spread of coronavirus.

Foreign pilgrims under the age of 18 will not be allowed to perform Umrah. As for domestic pilgrims, all those aged 12 years and above will be granted permit for Umrah and prayer at the Two Holy Mosques provided that they received two doses of vaccination against coronavirus.

The Ministry of Hajj and Umrah recently launched the service of issuing permits for Umrah as well as for access to the Grand Mosque in Makkah and the Prophet’s Mosque in Madinah for those coming from outside the Kingdom through the Eatmarna and Tawakkalna applications that are uploaded on the smartphones of the pilgrims.

While social distancing measures were lifted, pilgrims were still required to wear face masks and make reservations to perform Umrah and prayers in order to verify their immunity status at the entrances of the Two Holy Mosques.

The Saudi government on Thursday announced the lifting of travel ban on six countries, including Indonesia, Pakistan, India and Egypt effective from Dec. 1. These four countries used to send the largest contingents of Umrah pilgrims before the outbreak of the COVID-19 pandemic.

The King’s order to use the full capacity of the Two Holy Mosques and the latest lifting of the travel ban will be a big boost to the inflow of foreign Umrah pilgrims over the coming period after a hiatus of nearly two years.