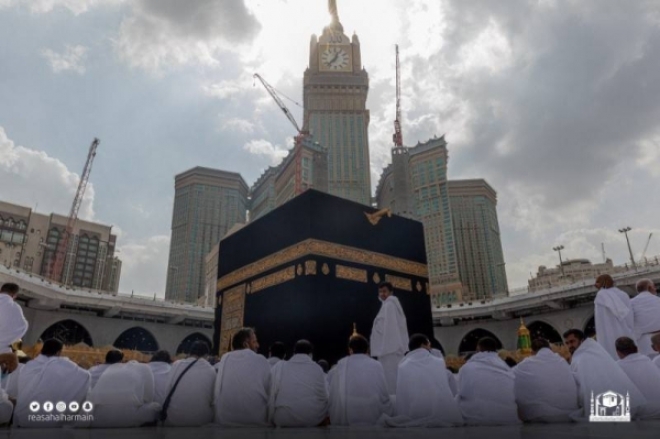 MAKKAH — The Ministry of Hajj and Umrah announced that there has been no service added on the Eatmarna application to book an appointment to kiss the Black Stone (Al-Hajar Al-Aswad).

The ministry clarified that the prospect of allowing the ritual of kissing the Black Stone is subject to the regulations of the General Presidency for the Affairs of the Two Holy Mosques. “There will also be no permission to enter inside the Holy Kaaba,” the ministry sources said.

Earlier, the ministry announced that there would be options on the Eatmarna and Tawakkalna applications to book appointment for kissing the Black Stone, touching the Yemeni Corner (Al-Rukn Al-Yamaani), and performing prayer at Hijr Ismail, a portion of which is considered as part of the Holy Kaaba.

The ministry had said the arrangement was made after adding a new icon titled “Tawaf” on the Eatmarna and Tawakkalna applications to facilitate booking appointment for the performance of tawaf for non-Umrah performers.

The ministry also made some procedures in this regard with putting forward a proposal to take advantage of the barriers available in the mataf (circumambulating area around the Holy Kaaba) to organize entry and exit so as to enable pilgrims and other worshipers to kiss the Black Stone. According to the ministry sources, the proposal had been referred to the competent authorities.