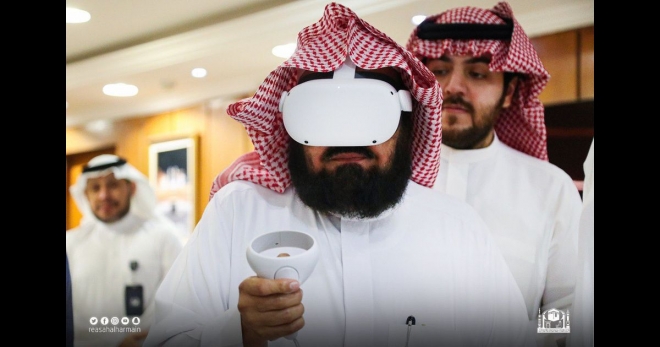 On Monday, Saudi Arabia launched the “Virtual Black Stone” initiative in cooperation with the Custodian of Two Holy Mosques Institute for Hajj and Umrah Research at Umm Al-Qura University. The initiative plans to use virtual reality and digital experiences to stimulate real reality.

Sheikh Dr. Abdulrahman bin Abdulaziz Al-Sudais, the General President of the Grand Mosque and Prophet’s mosque, was present at the inauguration ceremony. He stressed the need to create a virtual simulation environment, to stimulate the maximum number of senses like vision, hearing, touch, and even smell, to utilize the maximum capability of the presidency that belongs to the Two Holy Mosques.

Sheikh Al-Sudais said that the Two Holy Mosques possess great religious and historical relics which must be digitized and communicated to all with the help provided by the Saudi leadership.

According to the Saudi Official, the image is 49,0000 megapixels picture. It took 50 working hours to process the 1050 photos. The rare photo was released on Monday by the Saudi ministry.

Adviser to the Saudi ministry said that the Black Stone (Hajr-e-Aswad) is a “piece of Jannah and the first-ever high-resolution pictures reflect how beautiful paradise would be.”

Hajr-e-Aswad is placed at the eastern corner of the Ka’aba and is thought to be a hole that can be seen through a big hole in the silver encasement. The Black Stone is comprised of eight small rocks but molded together using Arabic frankincense.

The smallest stone is approximately 1cm while the biggest does not exceed 2cm. Silver encasement serves only as protection for the stone. According to Islamic history, Black Stone was placed by Hazrat Ibrahim given to him by Angel Gabriel who was sent down from heaven.


⇐ Previous:
No appointments to kiss Black Stone
Next: ⇒
Ministry of Hajj allows foreign pilgrims aged 12 and above to perform Umrah