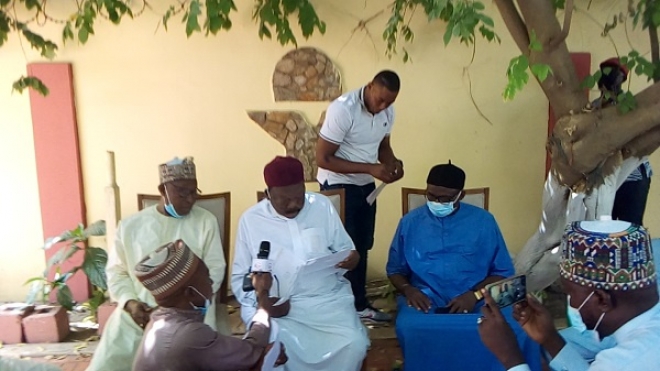 The Ghana Hajj Agents Association has pledged its support for the Hajj Board Chairman, Sheikh I. C Quaye to ensure a successful Hajj Operations in 2022.

The association made the pledge during its visit to the Hajj Board Chairman at his residence in Accra to introduce the newly elected Chairman and Executives of the Association to Chairman I.C Quaye.

In his remarks, the newly elected Chairman of the Association, Alhaji Alhassan Ansaria expressed the association's appreciation to Sheikh I.C Quaye for his support to the association and Hajj in Ghana.

According to him, despite his age, Sheikh I.C Quaye has worked as a young energetic man as the Hajj Board Chairman .

Alhaji Ansaria noted that, their visit to the Chairman has enlightened them as well as encouraged them to learn more.

He prayed for Allah's protection for the Hajj Board Chairman.

Alhaji Alhassan Ansaria further expressed the association's appreciation for the good work and support the government of Ghana has been giving to the Association.

He revealed that the Hajj Board under the leadership of Sheikh I.C Quaye has witnessed a sudden change in the operation of Hajj in Ghana.

He said there have never been significant changes in Hajj operation as has been seen in the history of Hajj and therefore called on Ghanaians to appreciate the hard work of Sheikh I.C Quaye.

He added that the visit of the association is not only to introduce the newly elected members to the Chairman but to also inform him of the association's support and commitment to make this year's Hajj a successful one.

On his part, the Chairman of the Ghana Hajj Board, Sheikh I.C Quaye expressed his gratitude to the Association and assured them that the 2022 Hajj Pilgrimage is a done deal and will surely come off .

According to him, in other countries, it is difficult for Hajj Agents and Hajj Board to work in harmony but under his leadership, the agents and the Hajj Board are working in peace for the progress of Hajj in Ghana.

He said the, Hajj committee under his watch provided food and basic needs for pilgrims which according to him made life bearable for all pilgrims in the Kingdom of Saudi Arabia.

He added that despite the COVID -19 pandemic, the Hajj Board is working around the clock to ensure a successful Hajj anytime the ban is lifted.

Sheikh I.C Quaye revealed that 270 people who paid to embark on Hajj but could not make it due to the pandemic have their money refunded to them.