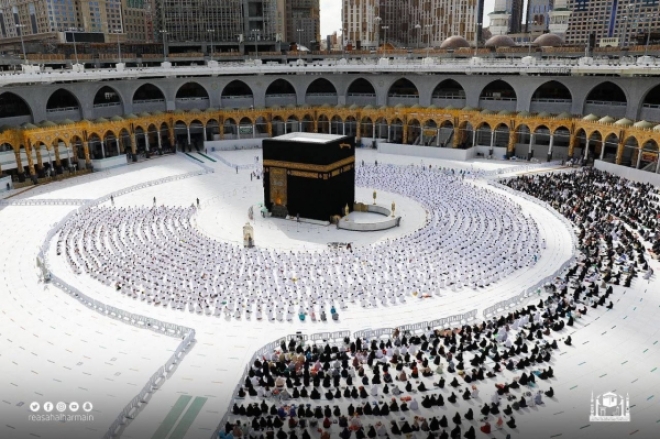 MAKKAH - The General Presidency for the Affairs of the Two Holy Mosques on Thursday has redistributed the social distancing stickers in the Grand Mosque in Makkah.

The Social distancing stickers were distributed in the courtyard and all chapels inside the corridors of the Mosque, following Saudi Arabia's decision to re-impose wearing of face masks and maintaning physical distancing.

The General Presidency stated in an interview with Al-Ekhbariya that its employees are working on developing organizational plans in the coming days to regulate the physical distance between worshipers.

The presidency will tighten its organizational plans to achieve compliance with the precautionary measures, and not to be negligent in obligating everyone to wear face masks.

These strict measures come in order to preserve the health and safety of visitors of the Two Holy mosques.

The Presidency announced earlier in a statement that it was decided to re-impose the physical distancing measures among the Umrah pilgrims and worshipers as well as in spreading prayer rugs and while performing tawaf (circumambulation around the Holy Kaaba) so as to safeguard the health and ensure safety of the pilgrims.

Additionally, the Presidency called on everyone to adhere to the timing for the entry on the basis of the stipulated time mentioned in the Umrah and prayer permits issued by Eatmarna and Tawakkalna applications, and complying with the instructions issued by the authorities at the Two Holy Mosques.

It is noteworthy that the Ministry of Interior announced on Wednesday the re-imposition of wearing masks and maintaining physical distancing measures in all indoors and outdoors effective from December 30, in a new move to stem the spread of the mutated Omicron variant of coronavirus.