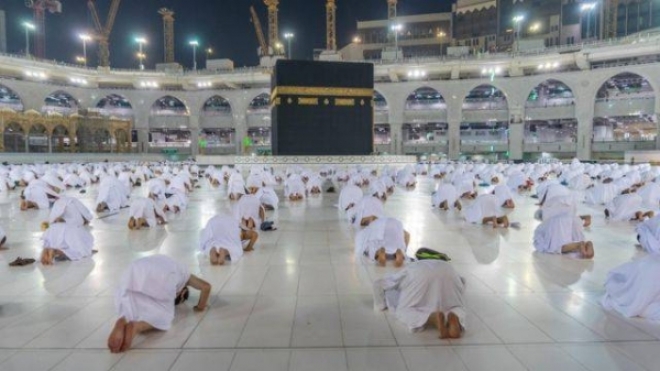 MAKKAH — The General Presidency for the Affairs of the Two Holy Mosques announced on Wednesday that wearing masks and maintaining physical distancing will be mandatory at the Grand Mosque in Makkah and the Prophet’s Mosque in Madinah effective from 7:00 am on Thursday.

The Presidency said in a statement that it was decided to re-impose the physical distancing measures among the Umrah pilgrims and worshipers as well as in spreading prayer rugs and while performing tawaf (circumambulation around the Holy Kaaba) so as to safeguard the health and ensure safety of the pilgrims.

The presidency called on all visitors and the workers at the Two Holy Mosques to comply with the precautionary measures, by wearing masks and maintaining physical distance, in addition to adhering to the timing for the entry on the basis of the stipulated time mentioned in the Umrah and prayer permits issued by Eatmarna and Tawakkalna applications, and complying with the instructions issued by the authorities at the Two Holy Mosques.

It is noteworthy that the Ministry of Interior announced on Wednesday the re-imposition of wearing masks and maintaining physical distancing measures in all indoors and outdoors effective from Thursday, in a new move to stem the spread of the mutated Omicron variant of coronavirus.