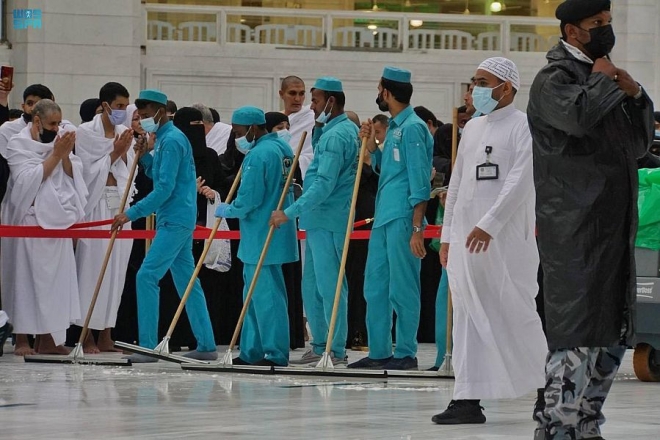 Saudi authorities said they have intensified efforts to clear the effects of Tuesday’s rain on the Grand Mosque in Makkah.

The Kingdom’s civil defense urged the public to be vigilant on Monday after the meteorology center forecast heavy rain and thunderstorms in several regions of the Kingdom, starting on Tuesday and lasting until Thursday.

The General Presidency for the Affairs of the Grand Mosque and the Prophet’s Mosque said it recruited more than 200 supervisors and observers who participated in monitoring over 4,000 workers, a statement on state-run SPA news agency said.

Mohammed Al-Jabri, the under-secretary-general for services and field affairs and environmental protection investigation, said as soon as the rain stops, the courtyard, chapels, entrances and exits have been prepared to drain the water in order to preserve the safety of pilgrims in the Grand Mosque and to perform their rituals with ease.

“The presidency distributed water suction and washing equipment inside and outside the mosque to effectively contribute to the drying process,” he said, adding 470 machines and other equipment have been deployed in the courtyard, the outer yards and the roof.

Al-Jabri said that the presidency has developed a precautionary plan in preparation for the rain, in addition to cleaning drainage and manholes to ensure there is no blockage.