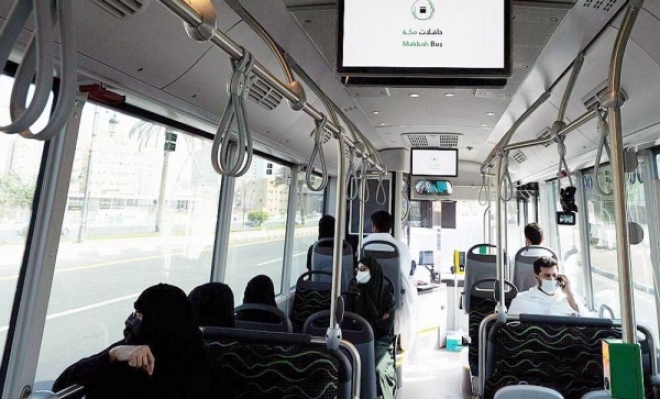 MAKKAH — The Royal Commission for Makkah City and Holy Sites, through the Unified Center for Transport in Makkah (Makkah Transport), Tuesday launched the trials of the first phase of the Public Transport Buses Project in Makkah.

The phase one trials are being conducted on the track that connects the Haramain High Speed Railway Station in Rusaifah neighborhood and Jabal Omar Station near the Holy Mosque parks. The project is considered one of the initiatives of Doyof AlRahman Program, which is part of the executive programs of Saudi Vision 2030.

The project is an extension for previous efforts made by the Royal Commission for Makkah City and Holy Sites, under the presidency of Prince Khalid Al-Faisal, Advisor to the Custodian of the Two Holy Mosques and Governor of Makkah Region.

CEO of the Commission Eng. Abdulrahman Addas said that the Makkah Transport realizes institutional integration among concerned institutions in the transport sector in Makkah and the Holy Sites, where comprehensive planning, assets administration and operations and project management fall under its organizational structure.

Addas said that Makkah Transport aims at developing the transport services to be more comfortable and safer according to advanced technologies to serve residents of Makkah and visitors of the Grand Mosque by taking into consideration the requirements of all ages and those of people with disabilities,

He stressed that the commission aspires, through the experimental operation, to provide necessary means to develop the level of services provided to citizens, residents and visitors of the Grand Mosque under an ongoing development and monitoring plan.

It is worth mentioning that this phase is part of a comprehensive plan for public transport in Makkah that aims at making a qualitative leap in developing public transport means and improving the level of service provided to residents and visitors of Makkah through an integrated service system.

The launching points commence at A7 track that connects the Haramain High Speed Railway Station in Rusaifah neighborhood and Jabal Omar Station near the Holy Mosque parks in an experimental stage that helps make tests on the operation mechanism to improve the level of operational efficiency of the bus network and assisting services.

The project plans to play an important role in reducing the number of cars on the streets of Makkah and then reducing the pollution and traffic jams, where the project will provide Makkah a safe and credited global transport system for the service of Makkah residents and visitors. — SPA