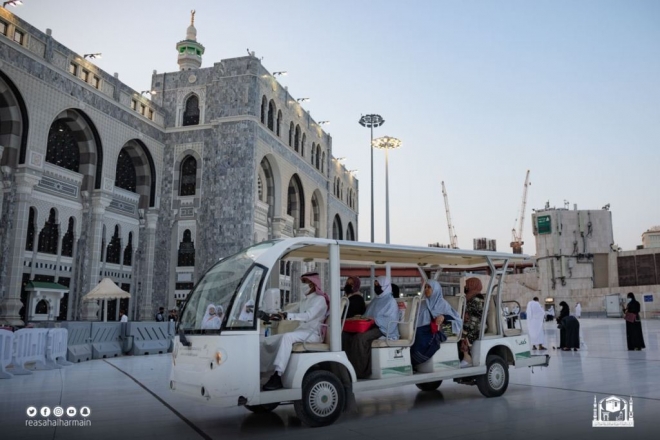 JEDDAH: Saudi Arabia’s General Presidency for the Affairs of the Two Holy Mosques is wasting no opportunity to cater for the large numbers of people expected to perform Umrah during Ramadan.

The presidency’s plans include the use of about 10 golf buggies to help those with special needs, as well as the elderly and ailing worshippers, to comfortably perform Umrah rituals.

Each of the buggies can carry up to 12 elderly and people with special needs, Jihad Al-Otaibi, public relations manager at the Grand Mosque, told Arab News.

Six of the vehicles have already started operating, and the presidency will add four more to help serve the elderly, ailing and those with disabilities during Ramadan, which usually witnesses high numbers of Umrah performers.

Al-Otaibi said that the service previously had been halted halt due to the coronavirus pandemic.

Last August, the presidency provided 25 new paths at the Mataf courtyard in the Grand Mosque in Makkah, including four for the elderly and people with disabilities. The move was part of a bigger plan to manage crowds amid the pandemic.

Nizar Alaa El-Din, assistant undersecretary general of the presidency for grouping affairs and crowd management, said that the presidency manages groups of pilgrims “based on many factors and objectives.”

The presidency used its considerable experience to coordinate with other parties and ensure effective communication with all groups working in the Grand Mosque, he added.

El-Din said that the presidency has benefited from numerous studies and approaches that have helped to provide smooth and organized entry and exit points at the holy site.

Speaking to the Saudi Press Agency, Adel bin Obaid Al-Ahmadi, the presidency’s vice president for public relations, institutional communication and community partnerships, said that the presidency is keen to facilitate the movement of pilgrims, especially the elderly and those with special needs, within the courtyards of the holy mosques.

Al-Ahmadi said that service points staffed by qualified presidency employees have been set up to help worshippers from the time they approach the Grand Mosque to the end of their Umrah.

Health and precautionary measures, including cleaning and social distancing, will help protect worshippers from illness.

The presidency has also intensified its efforts in preparation for the month of Ramadan, which normally sees increasing numbers of Umrah performers, Al-Ahmadi said.