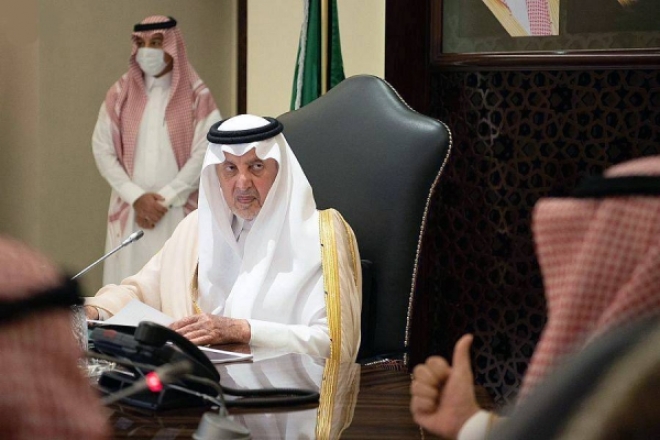 JEDDAH — Prince Khaled Al-Faisal, advisor to the Custodian of the Two Holy Mosques, governor of Makkah Region, chaired a meeting in Jeddah, attended by the Minister of Communications and Information Technology, Eng. Abdullah Al-Sawaha, to discuss plans and mechanisms for transforming the Makkah region into a smart region.

During the meeting, which was also attended by the heads of universities in the region, Prince Khaled was briefed on the work carried out by the Ministry of Communications to contribute to the transformation of the region into a smart one, mainly the development of the digital infrastructure.

He was told that the number of 5G towers reached around 4,000 towers, and the average Internet speed reached 155 Mbps, more than double the global average internet speed, with the internet speed in the region increased by 63% 2021.

Concerning developing digital capabilities, more than 11,000 individuals have been enrolled in direct courses in cooperation with the Makkah Region and universities in the region, where the number of volunteers in the digital giving initiative reaching 86,000 male and female volunteers, while the region hosts one of the best academies specialized in drones for use in development fields related to energy and aerial inspection.

The first batch of 50 specialists has already graduated, while the percentage of women’s participation in communications and information technology jobs in the region amounted to 28%.

The Ministry has implemented 400 meetings within the digital capacity development initiatives in the Makkah region, aimed at motivating young people to participate in digital competitions, activating the dissemination of knowledge, exploring technologies, and experimenting with transforming ideas into real prototypes, benefiting more than 6 million individuals since the start of the pandemic, and training 100 business pioneers in several fields.