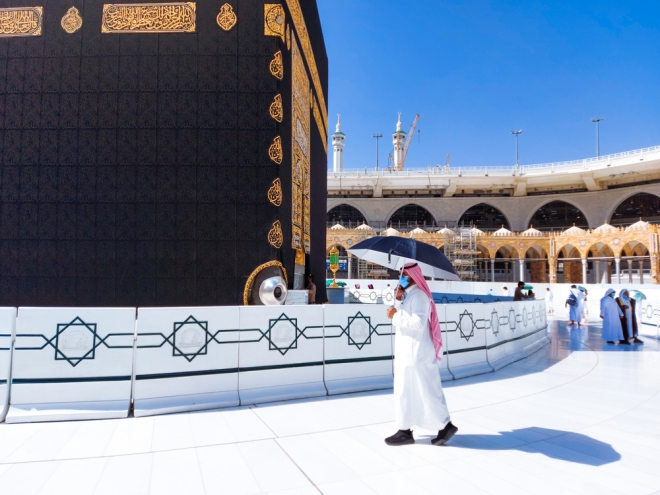 RIYADH: Saudi Arabia reported an 11.61-percent rise in the number of Umrah performers in 2021, reaching 6.5 million, according to official data.

The majority of Umrah performers do so within the country with a percentage of 99.81 percent, as they reached 6.48 million. This represents an increase of 228.5 percent compared to the previous year, the General Authority for Statistics revealed.

Over 3 million Saudi nationals performed Umrah in 2021, representing 46.7 percent of the total internal Umrah performers, while the 3.4 million non-Saudi Umrah performers represented the majority with 53.3 percent.

Umrah performers from abroad in 2021 hit 0.19 percent, with a total of 12,653, a fall of 99.7 percent over the previous year, due to worldwide travel restrictions amid the COVID-19 pandemic.

Some 58,745 pilgrims performed Hajj in the Islamic year 1442 H — 2021 —, according to the Administrative Record Data of the Ministry of Hajj and Umrah, GASTAT said.

The Hajj in 2021 was limited to citizens and residents inside the Kingdom as COVID-19 restrictions remained.

This number is larger than the year 2020 in which the total number of pilgrims was below 1,000 pilgrims when worldwide travel restrictions and lockdowns limited global travel to all but the essential.

The total number of Saudi pilgrims reached 33,034 pilgrims of both genders, without the participation of children in performing rituals, according to regulations imposed by the Saudi government on the organizational procedures for Hajj of the year 2021.

The total number of non-Saudi pilgrims residing in the Kingdom reached 25,711, according to the Administrative Record Data issued by the Ministry of Hajj and Umrah, 62.9 percent of them are males while 37.1 percent are females.


⇐ Previous:
Haj quota for M’sians may not increase this year
Next: ⇒
Dry foods are allowed inside the Two Holy Mosques