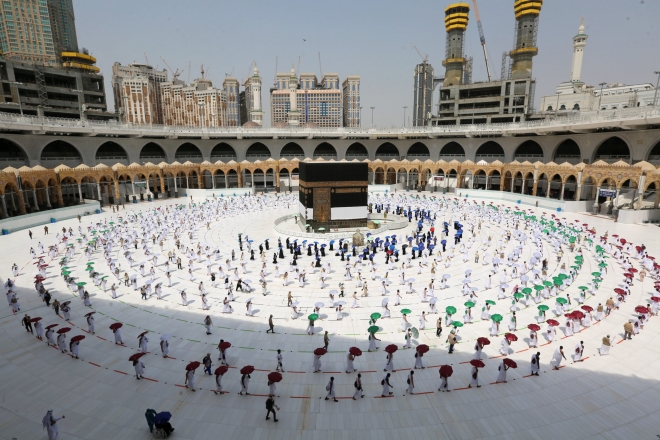 The National Hajj Commission (NAHCON) has said plans for this year’s hajj are still unclear as it awaits the number of slots to be given to the commission by the Saudi government.

Few days ago, Saudi lifted ban on foreign pilgrims after two years’ restriction occasioned by the COVID-19 pandemic in 2020, noting that one million pilgrims, including residents of the Kingdom, would perform Hajj this year as against 2 million it used to take.

In an interview with Daily Trust on Monday, NAHCON spokesperson, Fatima Sanda Usara, said that Nigeria was waiting for distribution of the global allocation of pilgrims.

She said, “This time has been unusual so we’ve not planned that for now because we don’t even know the circumstances surrounding the Hajj; we can’t predict anything, we are waiting.

“Normally, we do give some few months mostly before Ramadan and latest by Ramadan we stop collecting money and from then on, we process the accommodation and other Hajj essentials for the Nigeria pilgrims depending on the number of people that have paid but for this year, no.”

The commission also revealed that Nigeria usually got 95,000 slots annually from Saudi Arabia before the COVID-19 pandemic struck, adding that the number might not be feasible this year.

She said, “Saudi is the one to decide, normally we used to get 95000 slots every year, but as the way things are, we can’t say. We are waiting to know as well.”

Usara also said many states had stopped collecting fresh deposits for Hajj as the there was a backlog of two years’ payments by intending pilgrims.

“The state pilgrim welfare board is responsible for collecting money and they remit everything to NAHCON in its CBN account for onward payment because Saudi Arabia recognizes only NAHCON not the states.

The spokesperson revealed that the hajj process is entirely dependent on its already existing “first come first serve system” because there are people who paid since 2019.

She added, “So, those people will be the ones that will be considered first, unless they cannot make up to the payment or they decide on their own not to go for Hajj.  But once they are qualified and they satisfy the requirements, nothing stops them from going as far as NAHCON is concerned.”


⇐ Previous:
Introductory design for the landmarks of the Grand Mosque in Makkah inaugurated
Next: ⇒
Saudi Arabia allows entry of pilgrims from all countries without exception this year