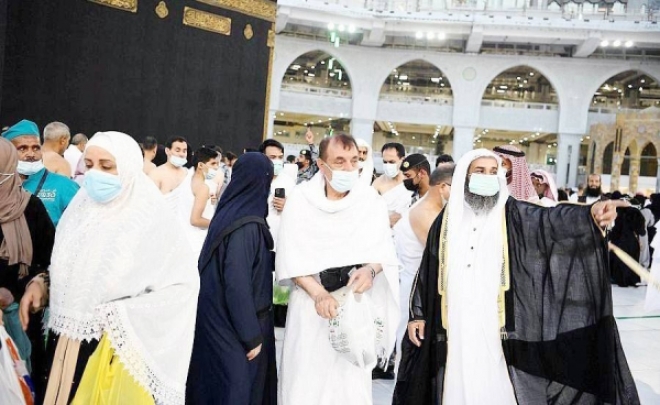 MAKKAH — The General Presidency for the Affairs of the Two Holy Mosques takes part in the awareness and organization works during the holy month of Ramadan, where it dispatches Umrah performers to the Tawaf (circumambulation) area and its employees are available at several locations, such as Al-Maqam and Al-Masaa with direct supervision duties.

These efforts also include organizing the movement of people at the circumambulation area upon their exit to Al-Masaa and at the praying area of the two prostrations of the Tawaf, and directing them to upper floors to reduce congestions.

This is in addition to offering awareness and advice inside the Grand Mosque through the "Digital Awareness" Center that is concerned with publishing awareness scientific items and helping organize the praying areas and dispatching Umrah performers in cooperation with concerned administrations.

The authority administration at the Grand Holy Mosque, during Ramadan, participates with 111 employees of qualified and trained human force to serve visitors of the Grand Mosque around the clock.

It also allocated several programs and initiatives, such as the "Speak good to people" program that cares for visitors and Umrah performers through dealing with them with good words and manners, in addition to distributing guiding printed materials in several languages, such as English, Urdu and Malayalam. — SPA