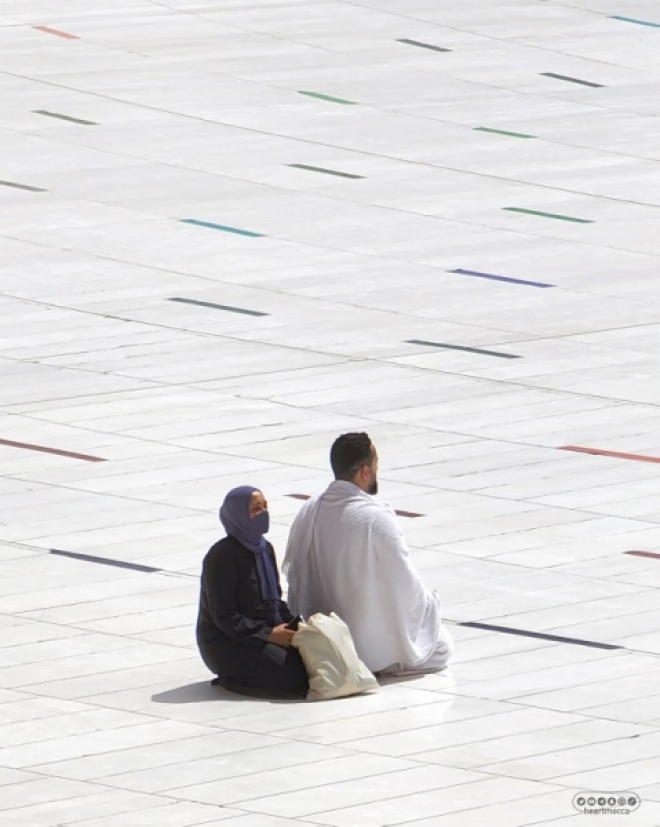 MAKKAH — The Saudi photographer Abdul Rahman Al-Sahli, who made the headlines for his incisive and intricate pictures of a touching humane scene during the holy month of Ramadan, at the holy Haram, for an act that now wears a holy halo, opened up to the press on how he chanced upon these wonderful pictures by being at the right place, at the right time.

He tells the story of the pictures that went viral on social media of a pilgrim who was sheltered from the scorching sun by her brother.

According to Sabq newspaper, Al-Sahli said that the sight of a girl sheltering behind her brother to escape the searing heat of the sun in this hot April month caught his eye. The two, steeped in piety at the Grand Mosque in Makkah, were also simultaneously trying to escape the nature’s hot touch, and this incongruent moment etched in Al-Sahli’s mind.

He immediately took out his camera to take several photos of them to document this noble and beautiful brotherly scene and a memorable moment. Al-Sahli said that he took the photos at about 1 p.m., noting that the sun and the weather was exceptionally hot at this time.

He said, after clicking a series of shots his photographic sense indicated that he had indeed landed a prize moment and felt sure that the pictures would go viral in social media and people would like it, and that is the story behind it.

“As a photographer, you must be prepared for such rare moments, and if you’re a second late, you will miss the shot!” Al-Sahli said, describing the moment as a rare touching scene. Al-Sahli happened to be there on the spot to catch the noble act, for he always takes pictures in the Grand Mosque for pilgrims and worshippers in his social media accounts: @heartmecca.

Al-Sahli expressed his pride and great happiness for taking these pictures, as it has become a source of happiness for the two siblings, noting that the noble brotherly scene prompted him to remember the words of God Almighty from surah al Qasas ayat 35, as [Allah] said “We will strengthen your arm through your brother”.

Ironically, the photos that went viral made people think that it was a picture of a woman being sheltered from the sun by her husband, which prompted the owner of the photo, blogger Abeer Najjar, to correct the information on her personal account in Instagram.

Abeer said that she felt overwhelmed with the love and sweet words people have had to share about the photo. Adding, the photographer caught this moment between her and her brother during their recent trip for Umrah and their last day in Makkah before heading to Madinah.

She said “We visited the Kaaba in the early afternoon when it was very sunny and warm. I stayed behind my brother for shade for a few minutes and the photographer captured this shot from afar.”

Abeer said that she didn’t know about the photos at that moment, but she realized that the pictures were of them when the photos started circulating online.

“This was a really special trip for so many reasons, so I’m grateful we have this photo to remember it and that it’s been a source of joy for so many,” Abeer said.